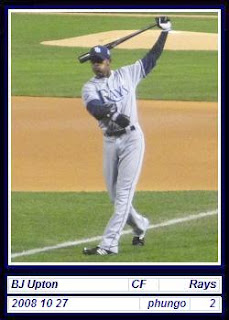 The Phils make there way north for a couple of exhibition games versus the Tamp Bay Rays Tonight and Tomorrow. The Rays are the same team the Phils faced the last time they played at Citizen's Bank Ballpark this past October. One of the Rays Superstars is B J Upton. Upton is the bright young centerfielder that should help them remain competitive for the next several years.

This Picture was taken prior to the beginning of the first half of Game 5. Upton took some warm up swings while stretching near the Left Field foul line. I gave Upton card number 2 to match his uniform number and marked his position as CF for Centerfield, rather than the generic OF for outfield.

Rocco Baldelli was running and stretching in the same area as Upton during warm-ups, but I never did get a suitable photo of him. Hopefully I will catch Rocco at a Red Sox game sometime this year.

Tonights game doesn't count, but it feels good to know that the boys are back in town and the Opening day is just around the corner.

For more information on Phungo Cards click here!
Posted by deal at 5:59 PM