Would you like to see some New Hero Numbers? 42 and 21

The recent Hall of Fame posts on Roberto Clemente and Jackie Robinson got me to thinking - Are Robinson and Clemente worthy of Hero numbers?
One of the facets of Topps cards that I prefer to Upper Deck is that they have Hero numbers. The numbers were present on the cards I grew up with and I enjoy seeing them on today's cards. Topps has also "retired" the number 7 to be used exclusively for Mickey Mantle.

If a card number can be retired to a specific player for on the field greatness, why not recognize a card number that represents social progress. I propose making card #42, Jackie Robinson's uniform number, a Hero Number. This way it is a living memorial honoring Jackie Robinson and what he represents. This is similar to the way players don uniform number 42 on Jackie Robinson day during the Major League season. Similarly I also think that Robero Clemente's 21 is worthy of the Hero number treatment as an honor to him and the rise of the Latin player.

Each year the cards could be a different player, this would surely generate some free publicity for Topps as the players and their credentials would likely be debated beyond baseball card circles. In the initial years the numbers would go to a Dodger and a Pirate but beyond that I would expand the player pool to all 30 teams. Juan Pierre would be a good pick from the Dodgers for the #42 honor. Perhaps Ian Snell, who represented Puerto Rico in the WBC could be the initial #21 representative.
In a hobby that is short on innovations that are not in reality gimmicks, I think it would be easy to do and would also generate a significant goodwill return for Topps.
It would be more interesting then than having another Corey Hart on card number 42. 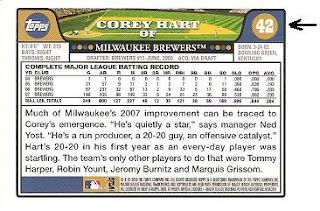 What do Phungo Readers think? is this an idea that Topps could run with?

Certainly would be easy enough to do. I like the idea of putting a different present-day player with the number, but one who relates to Robinson/Clemente. Because the No. 7 Mantle thing is just getting tired.

I liked the ideas here, but worried that seeing a regular set Jackie Robinson card will dilute the value of it. Night Owl's idea -- for instance, putting the Roberto Clemente Award winner as card #21 every year as a highlight card (a long lost art of all the card companies). This year, for instance, Pujols took that award. For Jackie Robinson or Mantle, there is no 'official' award. Certainly Topps could come up with some unofficial awards. Perhaps a sportsmanship award and their pick for MLB MVP respectively. The back could have some writing or stats comparison to speak to why the person was chosen. ... cool. Get Upper Deck and Topps on the horn.