Today we are taking a break from the Harry Kalas memorial posts so that we can go off to the Great White North for Phungo 5 with Trader Crack's. The Phils are in DC to play the Nationals and I thought this would be a good opportunity to find out some info on a part of the Nationals past, the Montreal Expos. While Trader Crack's is not an Expos blog specifically Ryan does have a pretty firm knowledge of the team and Canadian Players. Here is his Phungo 5:

1) Do you have any idea how many former Expos are still playing?

Off the top of my head, there’s Vladdie Guerrero. I’ve forgotten if Bartolo Colon stopped feasting on the hot dogs and got a team this year. Same sort of scenario for Brad Wilkerson, Pedro Martinez and Jose Vidro, minus the hot dogs. Then you’ve got Randy Johnson, Orlando Cabrera and Fernando Tatis. Jason Bay and Grady Sizemore came up in the Expos organization before being shipped to other teams. The last few years were a whirlwind of activity so I’m sure there’s plenty of other guys who suited up in Montreal and are still around.

Perhaps the most interesting former Expo still “playing” is their mascot Youpii, who has now taken over as the mascot for the NHL’s Montreal Canadiens.

2) The Expos were leading the NL East when the 1994 strike occured, do you think a playoff berth could have saved baseball in Montreal?

The Expos would have made it to the World Series in ’94 but I don’t think anything could have saved baseball. The Canadian dollar was very low at the time and there seemed to be tremendous frustration and apathy towards the team seeing as how the Expos were a farm team of sorts for the All-Star Game.

3) Is Matt Stairs playoff HR vs Dodgers the hardest ball ever hit by a Canadian?

Probably not. Can I prove it? Nope.

4) Any hints for my Hockey Playoff Brackets?

I heard that Wayne Gretzky is pretty good. They made a cartoon about him and he even had his own Barbie doll.

5) The McKenzie Brothers or Kids in the Hall?

Have the Kids in the Hall gotten their own MacFarlane figures? I didn’t think so.

I am glad to see that Youpii has found good work, and will likely outperform all the Expos. Apparently there is a virtual all-star team of Expos still playing. I will stick my personal assertion that Matt Stairs NLCS dinger is the hardest ball I have ever seen hit - Trader Cracks gets a 4 out of 5 in this weeks Phungo 5.

I also want to take this opportunity to post some football cards. A couple of weeks ago Trader Crack's posted that he had a bunch of Daunte Culpepper cards looking for a home. I didn't realize how many he had. Here are some of the highlights: 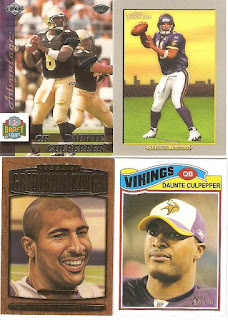 I would love to thank Ryan for his generosity - and I would also like to mention that in the box there were some duplicates and I would like to pay those forward. If anyone is interested please email me, my address is in my profile.

For a look back at a previous Phungo 5 click here for a look at Tulo Trader's Phungo 5.

Pedro back in the day, solid.