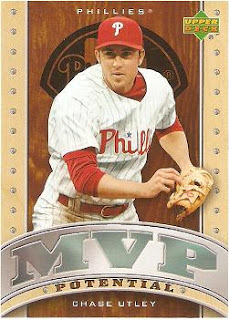 John Dewan, who is associated with Bill James, produces a weekly web column called Stat of the Week which looks inside the numbers of the game we all love. His most recent column dealt with a favorite topic of baseball junkies, Who is the best position player in the game.

Through a lot of statistical analysis involving both Offense and Defensive skills - Dewan's formula rated the Phillies own Chase Utley as the best player in the league over the last five years.

It's odd the Phillies roster over the last three seasons has featured two MVPs, a World Series MVP, and three different Cy Young award winners - yet Utley has to this point in his career has not been as decorated as the his many celebrated teammates.

Yet many Phils fans would consider Chase Utley to be the teams year in and year out MVP. He delivers everyday with both sides of his game. He is not about flash nor personal statistics. He is the anti-Hanley/Manny Ramirez - His only concern is winning.
His career has had many defining moments, ranging from a grand slam for his first hit to 5 homers during the 2009 World Series. To me his moment was a heads up play where he threw out Jason Bartlett at home during the decisive 5th game of the 2008 World Series.
Today team Phungo Salutes Chase Utley - And I am happy to see that Bill James and some complicated formula has recognized him as the best in the game.