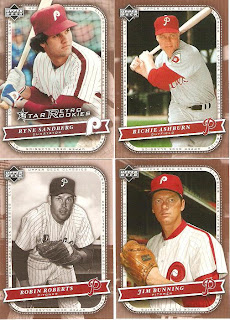 These are just four of the cards that I recieved in a recent Nachos Grande group Break. The Break involved the 05 UD Classics and 1998 UD Collectors Choice as well as a handful of miscellaneous packs.

I really enjoy the 05 UD Classics such as the ones featured above. The 1998 portion of the package included a heavy dose of Curt Schilling and Scott Rolen as the star cards from a rather down era for the Phils.

If your interested in another break that is being run by Nachos Grande check out the current break featuring five different boxes from 1995-2005.
Posted by deal at 7:59 PM