Phungo 5 with Cards on Cards

Now I am falling way behind. The Phils series with the Cardinals is already over and I still have not posted the Phugno 5 from Cardinals fan, Kerry, from the great Northwest. Kerry from Cards on Cards demonstrates his versatility here by giving us some feedback on not just the Cardinals, but also the Portland Trialblazers and one of our favorte bands.
First off a hoop question is the Trail Blazers season a success or failure?

If you’re talking about the regular season, then I’d have to say it was a resounding success. I’ve never seen another professional franchise have to deal with so much adversity, more in terms of volume than just severity, that the 09-10 Blazers went through. After Greg Oden went down, I really did not expect the team to make the playoffs considering all of the talent available in the Western Conference right now. The move to pick up Marcus Camby proved to be a critical one in terms of solidifying their playoff position. However, if you look at the end result, the bottom line is that the Blazers did not improve as a playoff team and improvement is what you strive for. 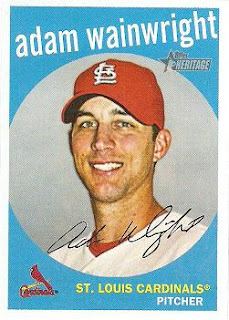 Do the Cardinals have the best rotation in baseball?

Yes, absolutely. But we’re in Week 5 of the season right now. Adam Wainwright is among the select few elite pitchers in baseball, in company with Roy Halliday and Tim Lincecum. Chris Carpenter is simply amazing at 35. But when you look at the rest of the rotation, we’re getting the best case scenario from all three pitchers. Brad Penny has been the All-Star caliber pitcher he was in 2006-2007, albeit with a Dave Duncanized groundball rate (which means fewer strikeouts.) Kyle Lohse has looked, at times, like the healthy 2008 version of himself. And Jaime Garcia has lived up to his pre-Tommy John surgery top prospect billing. I think it would be quite a leap of faith to count on the latter three situations continuing for the rest of the season, but if one or two of them continue to play out that way I’ll be a very happy Cardinal fan.

I’m going to go ahead and say 2002 for purely aesthetic reasons. I think the most interesting Heritage Cardinals cards end up being short prints, so it’s hard for me to say whether that becomes a “best” situation or is just simply annoying. Also, I don’t have many 2002 Heritage cards, so feel free to send me some!

Last year you introduced us to Daryl Jones - He appears to be struggling this year after a pretty decent 2009. Any updates on his progress?

I suppose I’m admitting to being a bad fan if I reveal that I haven’t followed the minor league clubs at all so far this season. I guess you could blame it on the big club getting off to a huge start. When things aren’t going right, you naturally look to the minors to see what’s on the way. I suppose that it’s probably a bit disappointing that Jones is still in AA, but the AAA club does have two outfielders with big league experience on the roster and are loaded right now in the majors.

TMBG Question - What Album would you like to hear TMBG do a Concert of?

Ordinarily, I would say Apollo 18 without skipping a beat as it is one of my favorite albums of all-time. However, I know that they have done that one a few times on the east coast and I have actually been listening to the Then: The Earlier Years compilation lately. (I recently scored a used copy.) As far as I know, I’ve never heard of them performing Lincoln in its entirety, so I’d love to see that.

Thanks to Cards on Cards and we have a 5 out of 5. I think Kerry is correct in his analysis of the Cardinals rotation. As with all aspects of the game, the assumption that whatever happens in April is automatically replicated during the rest of the season is certainly dubious. That being said and despite their recent power outage in Philadelphia, I believe the Cards are in the race for the long haul. The Phils and Cards have both been in the mix the last couple of years, but have yet to meet in the playoffs - I think it would make for an exciting series.

For a look back at a previous Phungo 5 with Sports Locker click here.

Email ThisBlogThis!Share to TwitterShare to FacebookShare to Pinterest
Labels: Adam Wainwright, Cards on Cards, Phungo 5, They Might Be Giants