Monday May 10th marked the 40th anniversary of the Boston Bruins winning the 1969-70 Stanley Cup on Bobby Orr's Overtime goal. The goal was captured in a famous photograph taken by Ray Lussier. This card is just one of the many which make us all miss UD Masterpieces. It captures an image we, as sports fans, have seen countless times. It is similar to the Willie Mays "Catch" footage, It is from an era before I was cognizant of the game, yet it is instantly recognizable.

It is truly a shame that Masterpieces had to go away - I am not sure what it takes to license a card like this one much less 20 or so for a nice card set. Perhaps Masterpieces is best left alone. future sets would have only been disappointments. I know that 08 Baseball is a shell of 2007 Masterpieces. 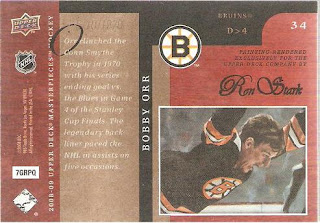 I also like how in 08-09 Hockey Masterpieces UD recognizes the artist on the flip side of the cards. This card features the work of Ron Stark who had previously also done work for Topps Gallery Edition Cards.

Ok enough about Bobby Orr and Days of Yore - In the present day The Flyers are locked in a best of 7 with Bobby's Bruins and I am hoping for a big comeback from the Broad Street Bullies.
Posted by deal at 6:31 PM