It is a good thing I got involved in the Cardboard Junkie Heritage Blaster League - or else I would have a very little fodder for Pull of the Month. 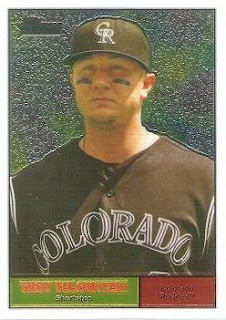 I was also pretty happy with this Topps Heritage Then & Now Insert that came out of the box. 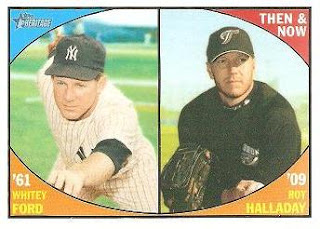 Not exactly sure how Topps came up with this one. According to the card back Ford actually finished 8th in shutouts in 1961. And if the stat doesn't match up there isn't much of a reason to pair up the HoF lefty with The Phils new staff ace.

I could also mention some of the cards I picked up in a group break from Nachos Grande that would be Pull of the month worthy, but I am sticking to packs I actually opened this month. 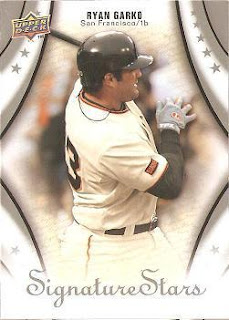 This product only has 100 veterans and Ryan Garko gets a card marking his 40 games as a San Francisco Giant?

If you want to find out more about the rather bland UD Signature Stars set check out my pack break over at A Pack to be Named Later.

Previous Pull of the Month Posts

You're right, those signature stars are pretty bland. Any chance of getting the Elvis and Markakis from you though?

Big D those cards can definitely be had I will send you an email.