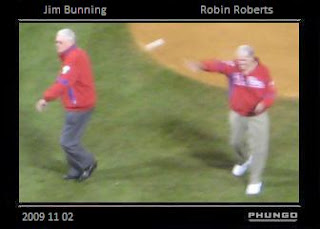 As mentioned a few days ago the photo from the above Phungo Card was taken prior to 2009 World Series Game 5. The Phils won that game, which was the final game pitched by Cliff Lee as a Phillie.

If you click the link from that post you can see the original picture from which this Phungo Card was created. Due to be taken at a distance under night game conditions the photo is a bit blurry. Thanks to creative reducing and cropping, I can make a photo that is somewhat cardworthy.

I believe this is the first 2010 Phungo Black Frame Insert I have posted. As with 2009 the cards feature a Solid Black Frame and Grey Lettering. The Phungo signature on the bottom right of the card has been altered slightly from 2009. Other than that the cards are basically the same.

Since Roberts passed away on Thursday several articles have been written by various bloggers. I have collected many of those links here.

Capewoods Collections has featured the largest collection of Roberts cards I have seen posted so far. The title card is a special card from the 1959 set which we here at Team Phungo are frequently writing about. The remainder of the cards are retro cards created after the Hall of Fame Pitchers playing days. There is a Fleer SI auto card featured here that I have had my eye on for a while.

The Phillies Room has featured Roberts cards in several recent posts. The intial Post featured a 1961 Topps Card. For a collection of Jim's Robin Roberts related posts click here. Jim's most recent post features Roberts 1960 Topps card, and he has added Roberts 1956 Card to the top of his sidebar.

Steve over at White Sox Cards even went as far as creating a custom card marking Robin Roberts short stint with the Chicago Cubs at the end of his career.

While Orioles Card "O" the Day posted the 1963 Roberts Card which is the first card to feature him and Oriole.

While checking out the 1963 Card Posted by Kevin I realized the black and white inset photo matches the one from Roberts 1960 Phillies card.

Mojo and Beardy have also posted a TTM auto of Roberts 1959 Topps base card.

Thanks for the link man, it's too bad that Robin is gone. He showed up in Baltimore from time to time in receent years and seemed like a good guy.

Great catch with the 1960 and 1963 Topps cards. I had never noticed that before.

Believe it or not, that's not a TTM. Topps sent me that card as a replacement for the Cat Osterman auto from Ginter that they also ended up sending me. It has the hologram sticker on the back and everything.