Kmart Bargain Bin - Thanks to Marie for the Heads Up. 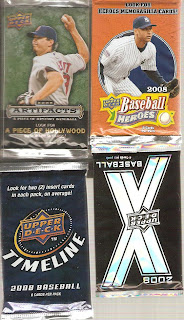 I was in my old neighborhood which has a different big K then my new locale and decided to check it out and see if they had any of the bargains that Marie over at A Cardboard Problem had found.

Turns out they did - lots o different blaters. They also had single backs at about 1/2 off and I decided to create my own buffet from the selection.

For real cost of each pack add 6% for PA Sales Tax.

If the Phillies ever score another run I will open a pack - or maybe I should open a pack to get them to score some runs. Any ideas on what pack would be the best luck for the Phils??
Posted by deal at 6:19 PM

Hell, open them all. We need an explosion tonight against the Mets!

Open the Timeline since that won't help with any runs tonight. Then open the rest after the game.

ugh - It didn't work. I opened them all and came up with no runs again.

BA Benny was right - Timeline doesn't help - and 3 packs of timeline must have doomed the Phils.