Another crazy week here at Phungo HQ. The Phillies are in the middle of a home and home series with the Blue Jays, unfortunately the two games in Philadelphia haven't got their way. 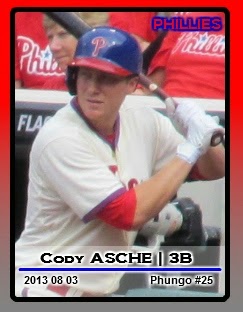 We have had a non-Phils card posted all week, today we are going to try and change the team's luck by posting a Phungo Card.

Last night Cody Asche popped a Grand Slam in the bottom of the sixth. Unofortunately it was not enough offense for a team that featured some sloppy play through the early innings. The Blue Jays manufactured a run in the 10th to take the contest 6-5.