Every once in a while you are sorting through junk wax and something catches your eye. 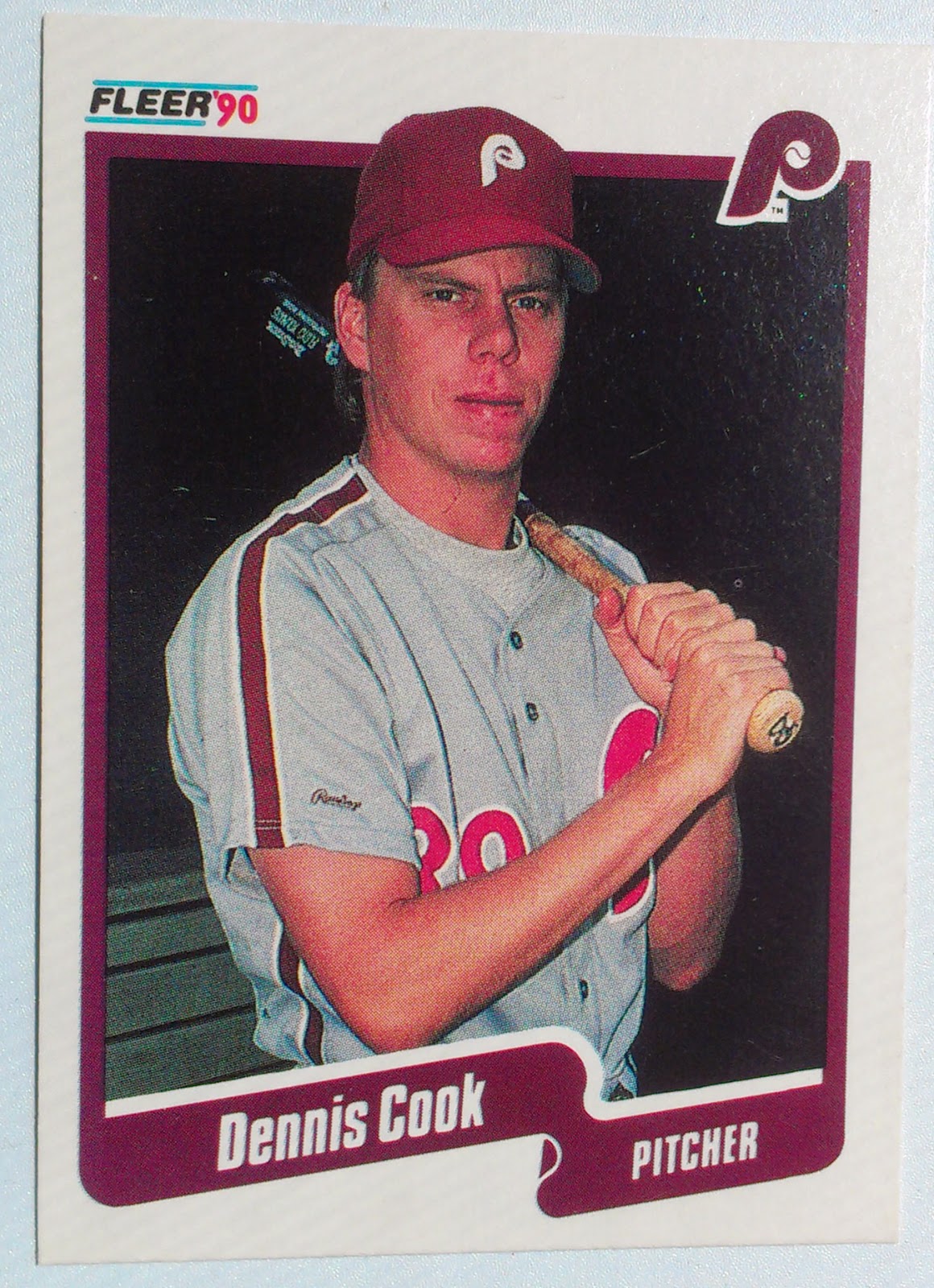 Initially the card was notable because Cook, a pitcher, is shown holding a bat. I was going to add this to my pitchers batting page and then a closer look revealed a goofy bat knob 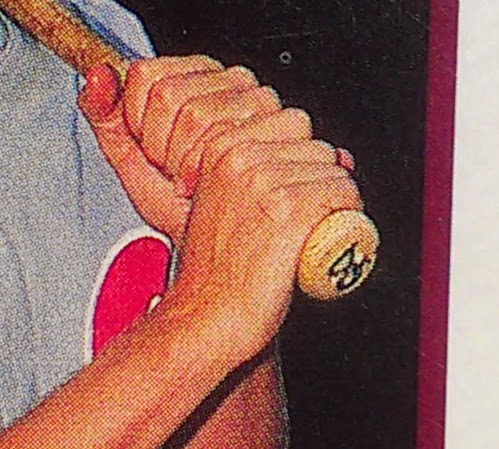 I was trying to make out Cook's number on the knob. He wore 30 and 39 while playing for the Phillies. I don't see that in there, but maybe maybe his initials DC are written over something else. My invetigation continued:

Looking at the other end of the bat....do my eyes decieve me or does that say Floyd Youmans? Ok I will need you to be the judge on that one, perhaps it is some bat company name or model. But bear with me and my belief that it does indeed say "Floyd Youmans" 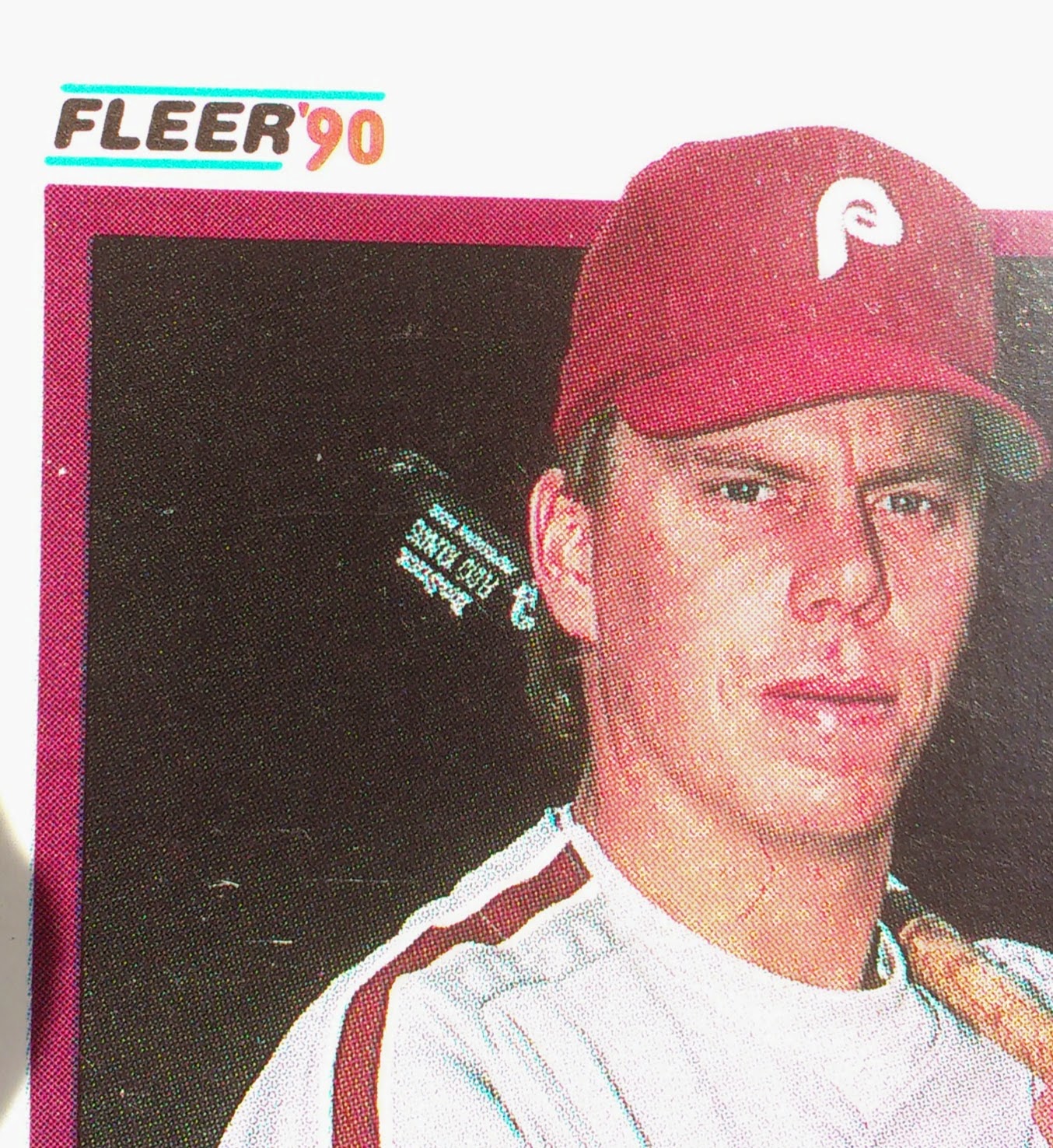 According to Baseball-ref Dennis Cook was traded to the Phillies on June 18 1989. Youmans started a game for the Phillies on June 24th and was never heard from again. Cook first started for the Phillies versus the Cardinals on June 22nd and took the mound every 5th day for the next two months. Yes Dennis Cook had basically replaced Floyd Youmans in the rotation. Furthemore remember that goofy bat knob - Floyd Youmans wore Uni #15, Remember my DC reference above, is it mre or does that look like a "DC" Scrawled over top of the nuumber 15?

After 1989 Floyd Youmans never pitched in the majors again, Dennis Cook who is actually a year older than Youmans went on to pitch (mostly as a reliever) for 15 years. Cook was a member of the 1997 World Champion Marlins and returned to the Series three years later as a valuable reliever in the New York Mets bullpen.

Nice work! By the way, Youmans was the opening day starter for the Phils that year!

He later went to the Reading Phillies--definitely in 1990 (as he is one or more R-Phils cards that season), and possibly in 1989 as well. He never pitched for them, per BBRef, which is consistent with my memory of his time there, during which we wondered why he was even there. I think technically it was injury rehab, but I'm not sure that actually occurred....