On Friday Night The Phillies lost to the Nationals 5-3 and took sole possession of last place in the NL East. Marlon Byrd got he Phillies off to a quick 3-0 start with a Home Run in the first, but that was it for the Phillies scoring.  The Phils were up 3-2 going into the 8th but Mike Adams and rest of the bullpen were unable to hold that lead. 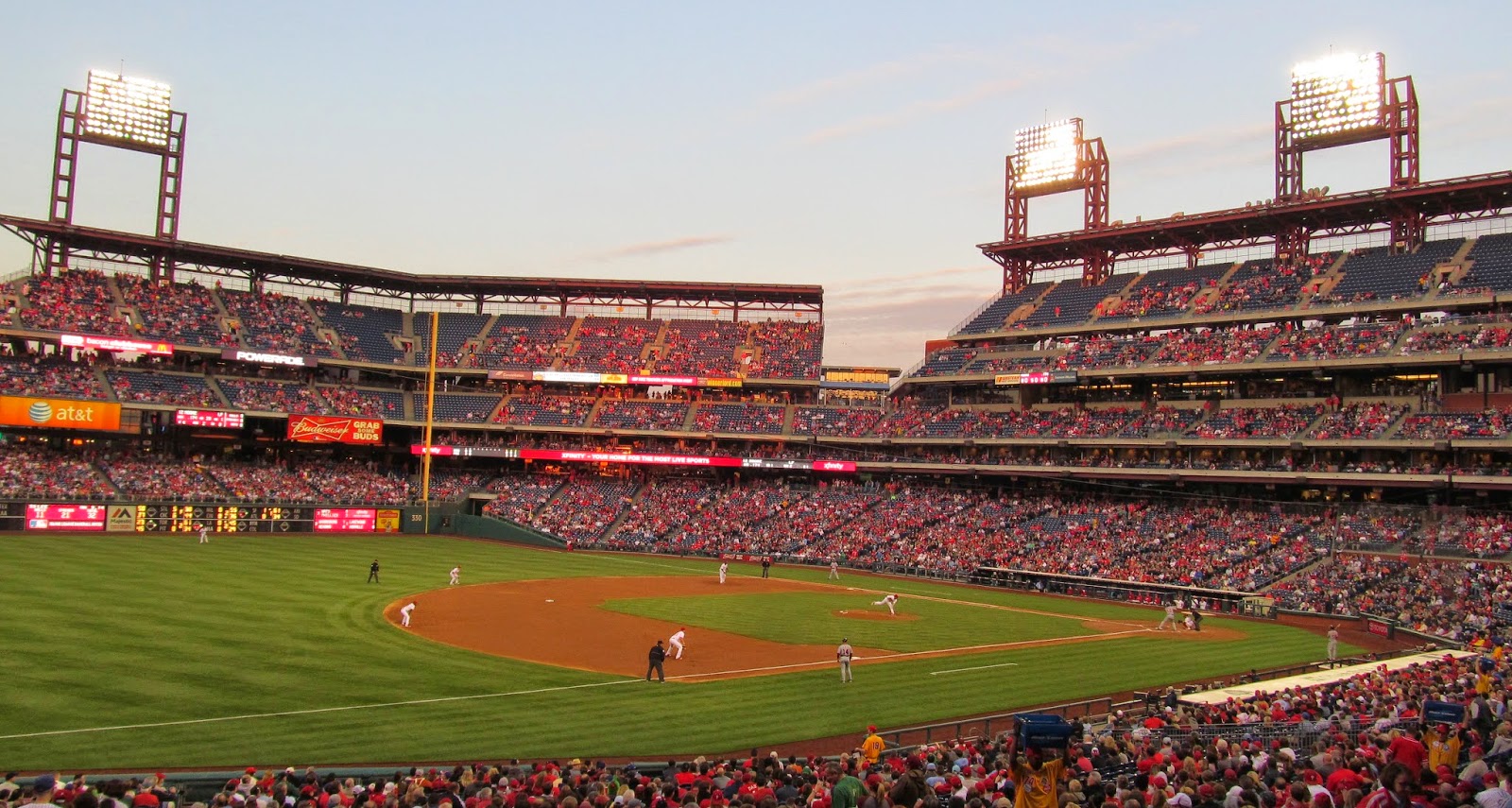 It was a beautiful night - this is a shot of Cliff Lee pitching to Tyler Moore to start the 3rd inning.Unfortunately later in this AB Moore would hit a line drive Home Run to left.

Notice anything odd here. This is Lee warming up by doing his fake pitch to towards 2nd base. He does this prior to the start of each inning. I am going to try out a few different angles to see if I can get a good shot of this interesting/odd quirk of Lee's routine. 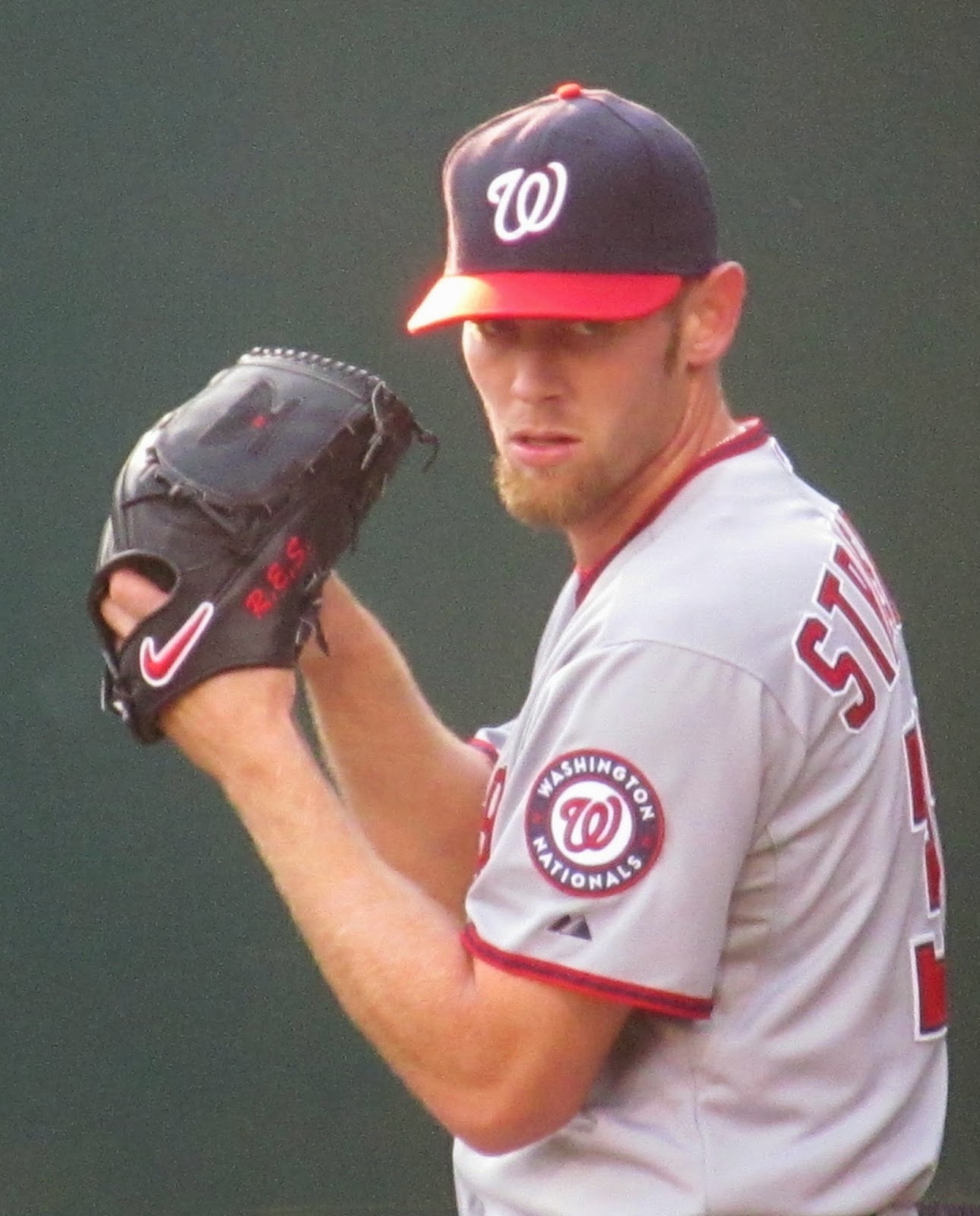 The bullpens are side by side on different levels at CBP. I had ambitions of getting both Lee and Strasburg throwing pitches in a single picture, but I was too impatient to wait around for the right shot. 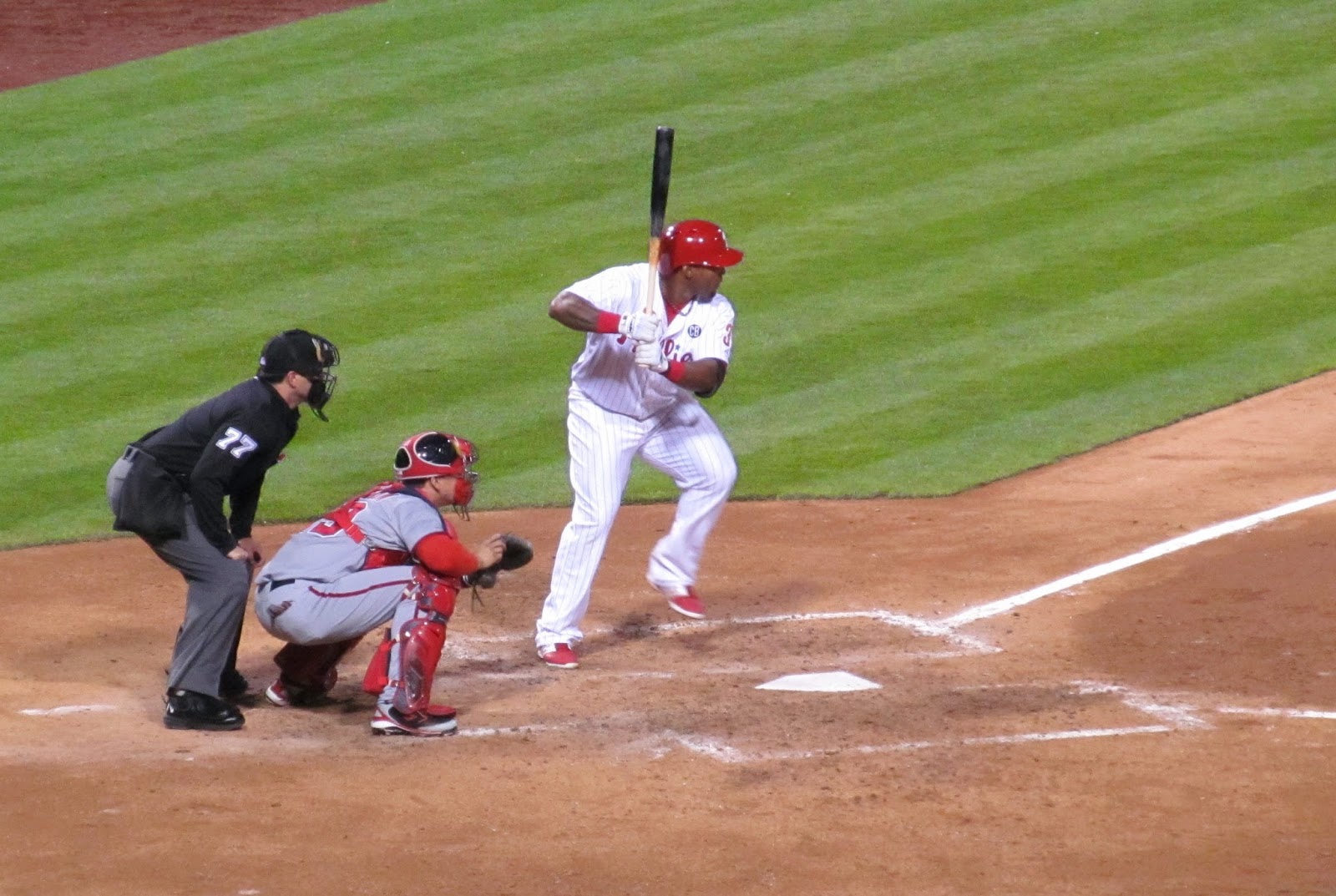 All of the Phillies scoring took place on a single swing of the bat by Byrd, This is a photo of the right fielder At Bat later in the game. He is demonstrating his quck high step timing the incoming pitch. 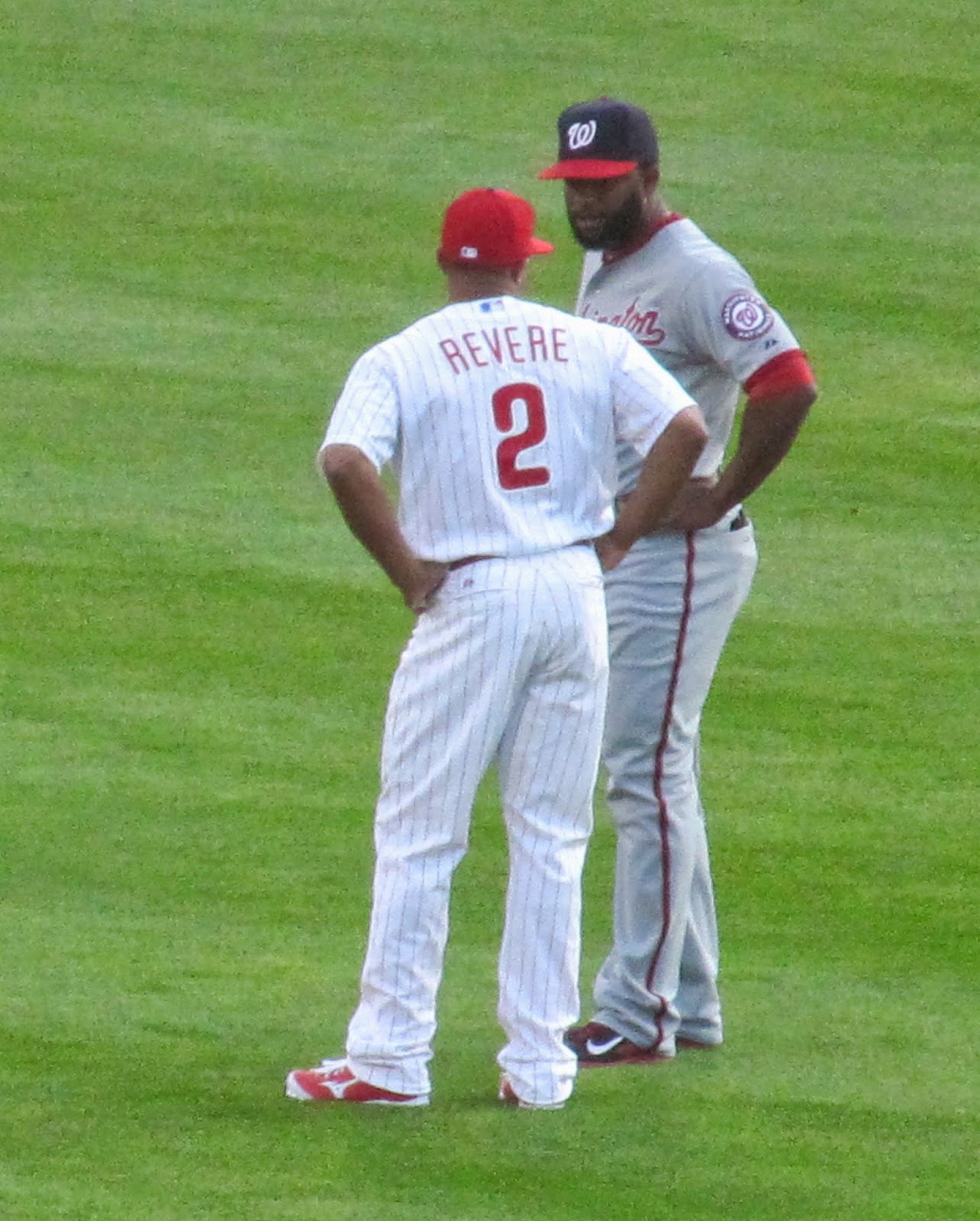 Both Centerfielders in the game were members of the same Twins outfield in 2012.  This is the in happy time prior to the game.... 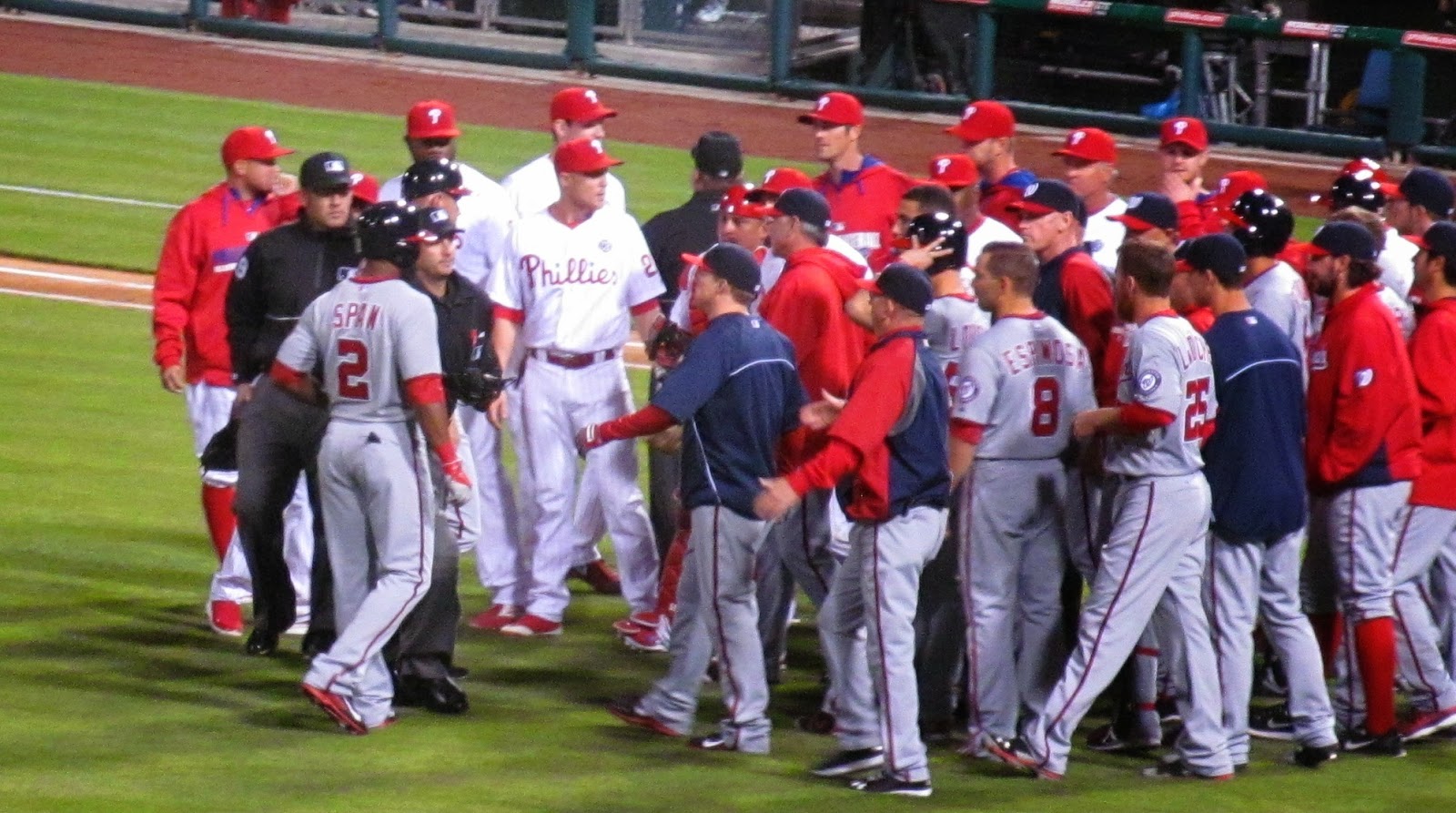 Cliff Lee and Denard Span had a disagreement regarding Span taking an elongated break out of the batters box in the 5th inning. Stephen Strasburg had just batted, and Span may have been trying to extend his pitchers half-inning break.  Benches cleared, names were called, no one got ejected and life continued.

Couple of interesting notes on the melee - Here we see Denard Span is separted from the remaining players by the umpiring crew. Cliff Lee is relatively close to Span with Cody Asche and Ryan Howard doing what they can to keep their pitcher out of trouble. I like how the main participants are on the left of the shot while the onrushing crowd of the benches comes in from the right - creates just a little tension in the photo.

I think the benches were issued warnings and Home Plate Umpire Jim Reynolds who talked to each reliever that entered the game - I am assuming he spoke to them regarding the handling of timeouts. Later in the game when one of the Nats relievers was dawdling he did allow Chase Utley to call a somewhat late time out 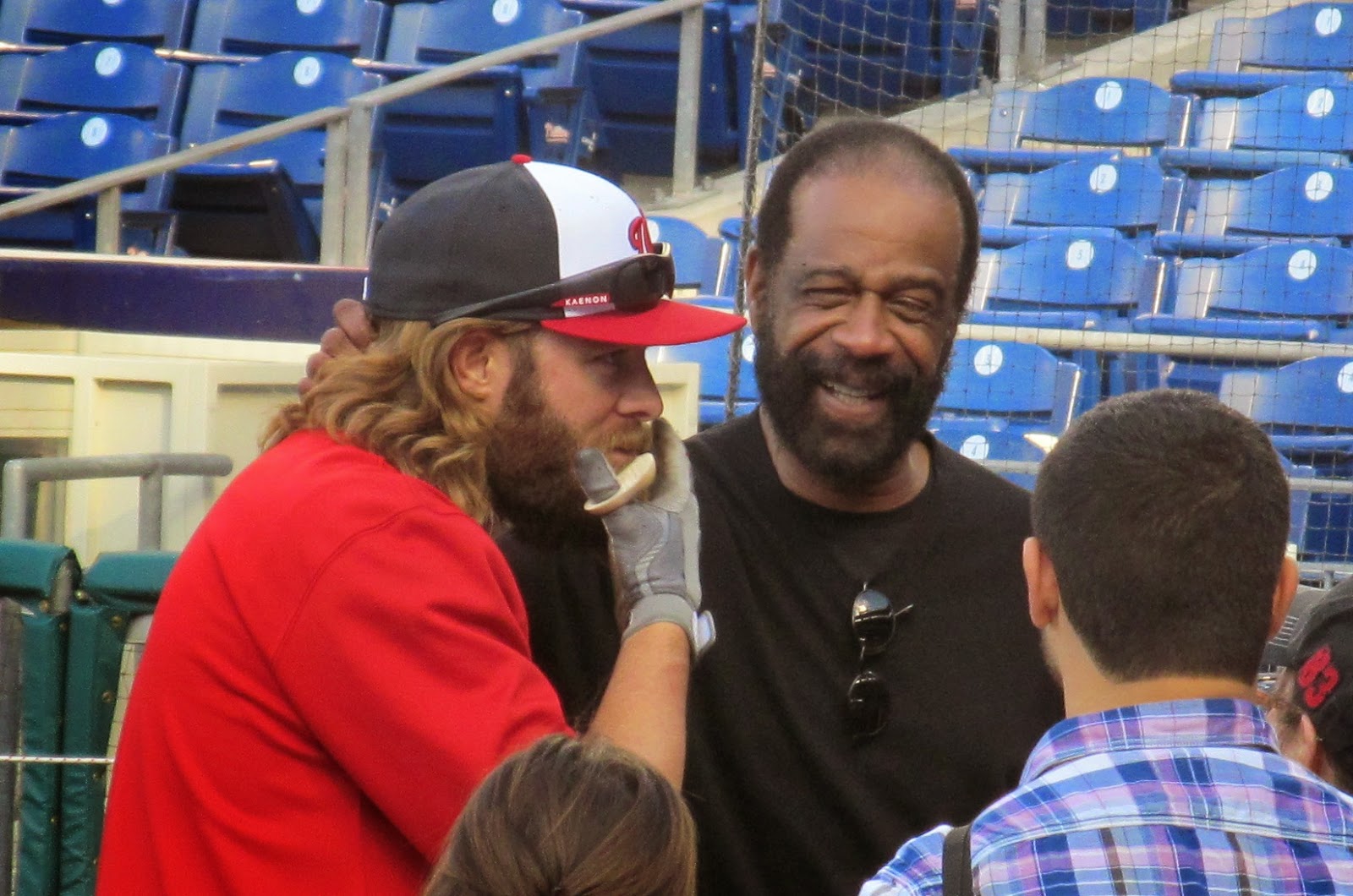 Garry Maddox was on hand for the game. He was greeting some sort of VIP fan group during BP - here he welcoms Jayson Werth to the group. 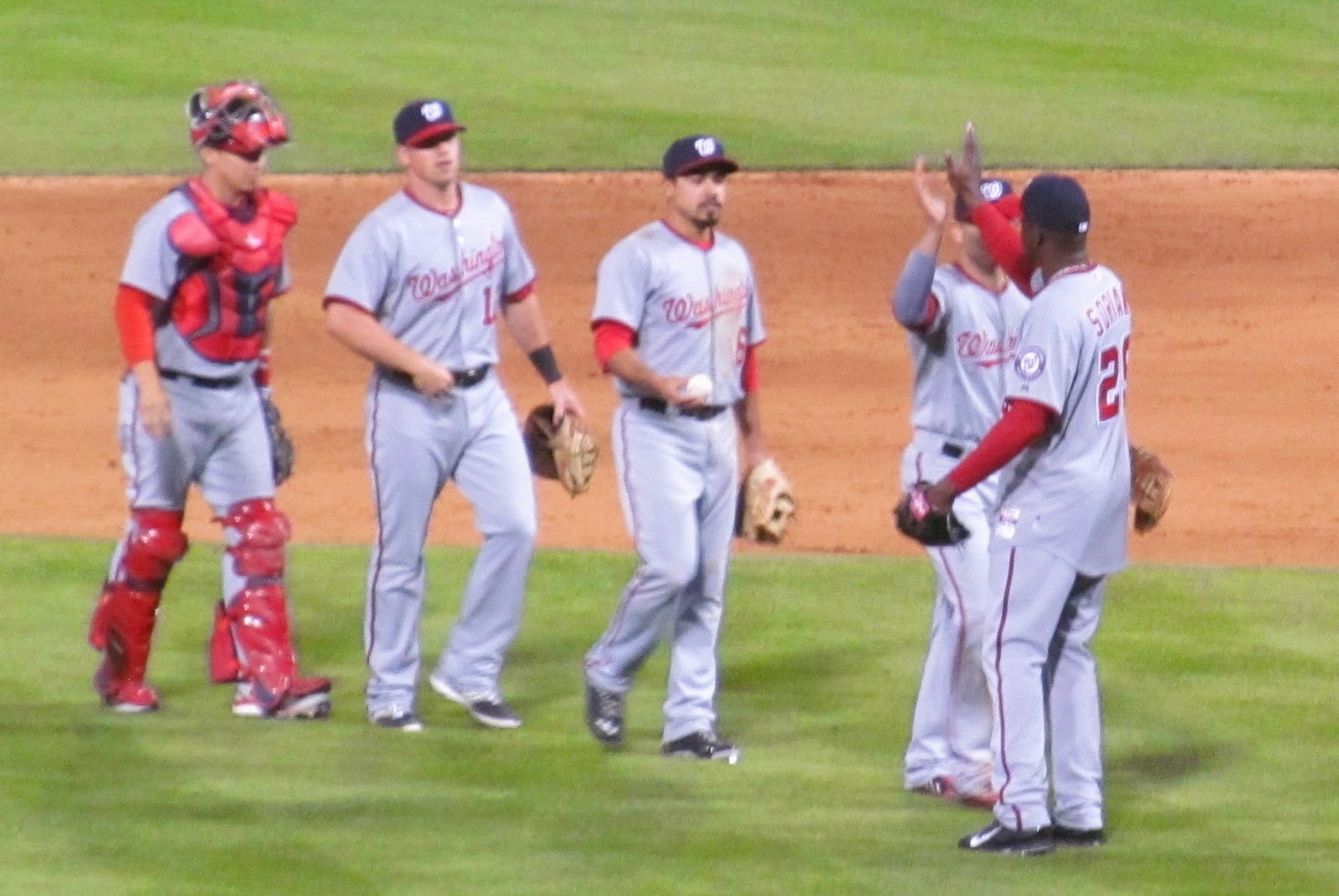 Anthony Rendon caught the last out, a pop out by Freddy (.032 Batting Average) Galvis. Here Rendon shown holding the ball out to give to closer Rafael Soriano.
Posted by deal at 11:11 AM