Crazy busy week hear at Phungo HQ, but I wanted to take a second to honor an accomplishment of the local nine. 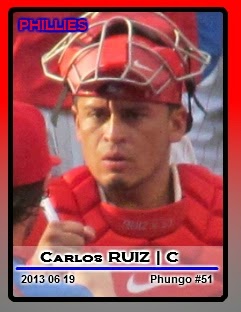 The Phillies now veteran catcher took home NL player of the week honors. The Phils have hung around in April 2014. This past week the Phils put together a 6-4 West Coast trip and Chooch was a significant contributor to those Ws. Ruiz batted .500 for the week ending April 27th - He led the league in RBIs (7) and Total Bases (20) while his 11 Hits and and eight runs scored ranked 2nd.