Earlier this month the baseball world got the sad news that Phillies Alum Darren Daulton has been diagnosed with a rare form of brain cancer.

Daulton's website has some information regarding his condition, but from what I understand the long term prognosis is not good. 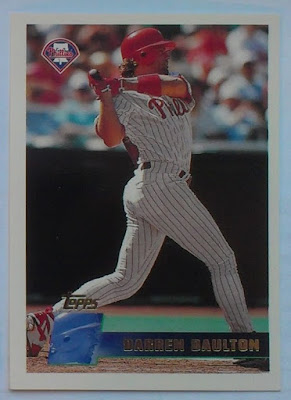 
Dutch was one of the first players that I became a fan of as an adult. Becoming a fan of a player as an adult differs from when your a kid. You see all sorts of flaws issues and questions - they are there for you to accept or ignore. Darren Daulton may not have been perfect, but for a few seasons in the early 1990s he between the whilte llines he  was damn near perfect. For that he will always be one of my favorite players.

I have seen Daulton at a handful of card show signings, and he always has seemed like a really decent guy.  Mostly a regular dude, but with a bit of a superstar aura to him.

I sincerely hope that Darren Daulton wins his battle with brain cancer and continues being a happy influence on the Philadelphia sport scene.

1983 Phillies
Folks may not know this but Darren Daulton had a cup of coffee with the 1983 Phillies - I have heard him cite being around that pennant winning team as an influence on his playing career. He may have only played 2 games with that squad, but he is the man that connects the 1983 NL champs with the beloved 1993 NL Champs.