Showing off a couple cards I picked up in a recent Nachos Grande Group Break. One box each of 2013 Topps S2 and 2012 Topps Archives.

Here are somie of the goodies from Series 2. 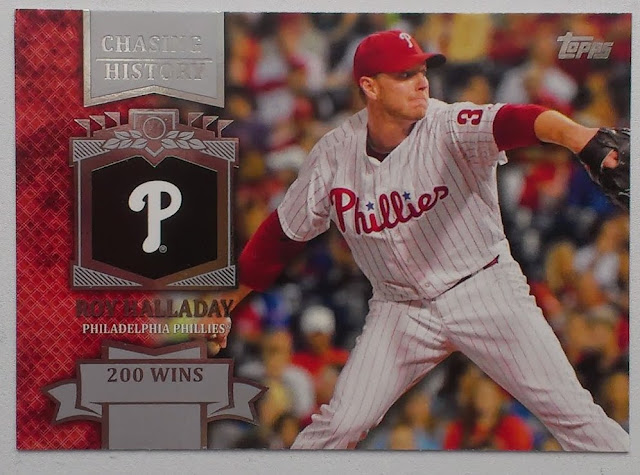 ﻿The flip of this card mentions that if Halladay got a Win before his first L in 2013 he would reach 200 wins with only 100 losses. Of course it didn't work out that way and he currently stands at 201-104. 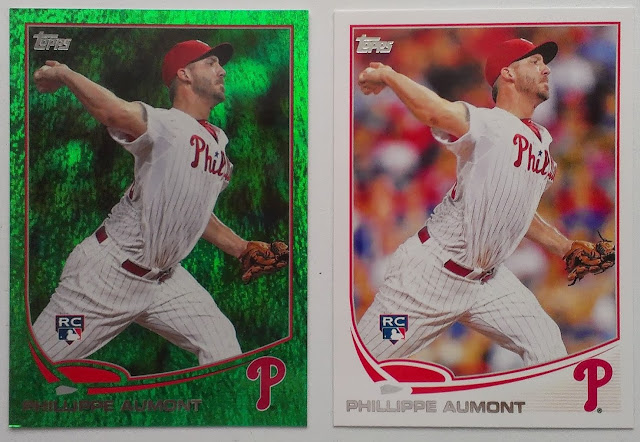 For the Phillies I am calling these Green (or is it Emerald) parallels, Christmas Cards.  I am a closet parallel junky. I hate to admit it - in general I like them. However, I am not insane crazy about them, I don't need to build sets of them or anything like that.

The 2013 Topps design has so much white on the border that the color does help. I am not a fan of the coloring within the picture background.

In the break I ended up getting the entire 2013 Topps S2 Phillies team set.  Here is a look at the checklist for Phillies cards from the combined 2013 S1 & S2 sets.

The break in the list is the separator between Series 1&2.  The biggest ommision is Michael Young (who curiously is featured in a Phils Uni on an Opening Day card).  Delmon Young has a Phils card in Gypsy Queen but not base. Biggest MIA after that are Antonio Bastardo, Freddy Galvis and John Lannan. Near as I could tell John Lannan has not been issued a Phillies card in any product.

The oddest thing Topps has done is putting Jose Contreras in 2013 Topps as a Phils pitcher.  He last pitched for the team on 6/1/2012.  He was just picked up last week by the Red Sox after being dumped by the Pirates.