Here we stand on the 4th of July, roughly half way through the baseball season and the Phillies appear to be positioned more to dismantle the remainder of the team of their recent glory years.

One of the key players, perhaps even the captain of those squads has been Chase Utley. 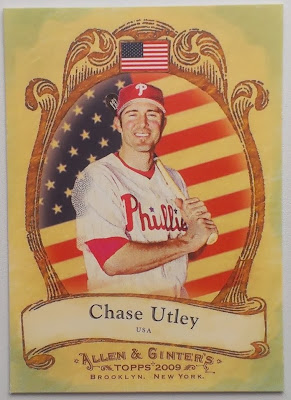 This may be the last 4th of July that we see Chase Utley at second base for the Phillies.  He has been the heart of the team for at least half a decade now, and if he goes it will be a sad moment in the Phillies history.


Chase Utley has been injury prone during recent years, but he has been the source of so many great baseball memories that I will likely always be a fan. I plan on enjoying what remains of Utley's Phillies tenure here, and will likely follow him wherever his career takes him.

I believe National Pride was the 1/Pack insert in 2009 A&G. It consists of 75 cards and represents players from different countries. 2009 was a WBC year, and this insert tied into the event nicely. I am a fan of many of the AnG per pack inserts, this one may be my favorite.

The fourth is a big grilling day with family BBQs and deck parties. A lot of Fathers will be grilling today and Chase Utley's 09 AnG National Pride has a great father and son story: 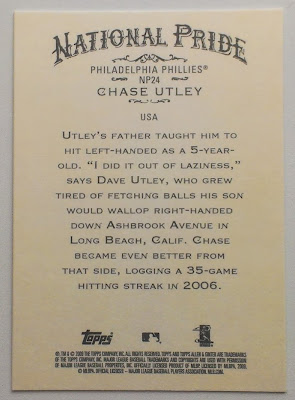