On Monday the Phillies announced that Ryan Howard has been scheduled for surgery and will be out 6-8 weeks. 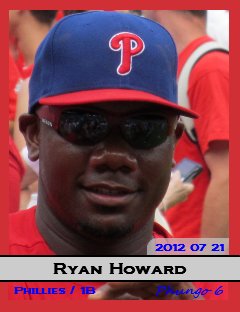 If those dates are accurate, best case scenario has Howard returning on Monday 8/19 v the Rockies.  That will be game 124 of the Phillies season. The Phils play 34 games in the interim. If the Braves play 2 games over that period they will be 68-54 (+14). To get to that the Phils would have to go 26-8 over that span.

A lot of things happen this time of year the All-Star break is much needed for the Phils, but immediately after that the Phillies could be severely revamped and Ryan Howard more than likely will be returning to a different team.

Phungo Card
Pix was taken on Phillies Photo day in 2012.  A great opportunity for fans to get out and gets some snapshots of their favorite players. At the time Ryan Howard had recently returned from the DL. he really hadn't hit well yet, but on that day he did get a 3 run homer.  Unfortunately it wasn't good enough as the Phils lost to the Giants 6-5 in extra innings.