The Phillies are on the road visiting the St Louis Cardinals this week and I thought it would be a good time to revisit a favorite card. 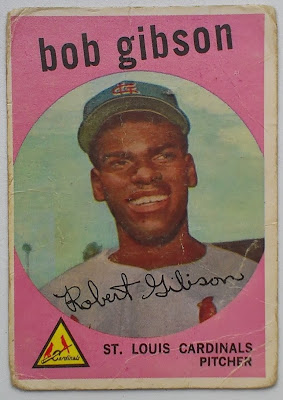 1959 Topps #514 Bob Gibson (RC)
We have discussed Bob Gibson Hall of Fame credentials previously and I will just re-mention here that he won 251 games, 2 World Series Rings, and a league MVP (1968).

FTC
The 2009 posting link above is one of the first where I did an e-bay check to look at pricing on a card. Today we re-examine those numbers.

Back when I first looked at this card in 2009 it had a low auction of $61.  This was during the season which may have buoyed the price. Also back then the eBay recent auctions function may not have spun back as far as it does currently.  When I ran a similar check in December of that year the low auction was $35.  The green $30 price was for the card pictured, which was picked up at a show in Valley Forge.

Today the lowest finsher is $48, I included the three lowest auctions for comparison.


The three auctions under $59 are the three mentioned in the first table.  I sort of broke the table out into ranges that cards fell together.  Pretty much one can assume the Bob Gibson RC can be found ungraded for under $75 if your willing to look aound for it.  Below $50 would be quite good.


Finally the above chart tells us what the card is going for in various grades. For the $1,384 card I didn't bother recording the condition, but I certainly hope it was MT.

Other Voices
'59 Topps: one f/g card at a time - a loving tribute to the Bob Gibson RC

As always, a great card.