The remarkable debut of Yasiel Puig has brought up comparisons to similar past performances. One of the names that emerged was that of one time Phillies coach Earle Combs 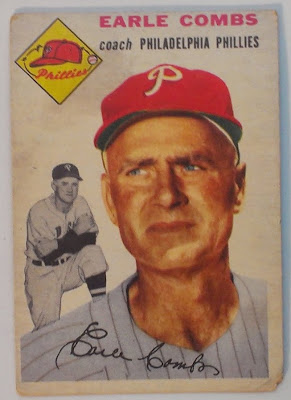 When Combs came up in 1925, he had 44 hits in his first 100 ABs.  A feat unmatched until Puig collected four hits versus the Phillies on Sunday.

Comparatives to Earle Combs put Yaseil Puig in pretty good company. Combs who spent his entire career with the New York Yankees went on to win 9 World Championships and a place in the Hall of Fame. Combs specialty was leading off and he did it well batting .325 lifetime with a .397 OBP.

One of my favorite tidbits regarding Combs is that as a member of the 1929 Yankees was one of the first players to wear a permanent uniform number.  The Yankees are considered the first team to make numbers permanent and for regular players they used a pretty simple system to disperse the numbers - your batting order position. Babe Ruth got 3, Lou Gehrig 4.  As the leadoff man Earle Combs got 1 and thus is noted as the first player to wear a number,

For more in depth info on Earle Combs, check in on the Earle Combs / Baseball Legend website.  It is well done informative and very entertaining.

$$$
If your interested in sponsoring a Baseball-Ref page you may want to look into Combs.  For $30 you get to tie your sites name to a Hall of Fame Yankee. That is pretty tough to beat.