Prior to this week, the last time the All-Star Game was held in New York the NL took the loss 4-3 in a 15 inning epic that ended on a sac fly by Michael Young off of Phillies closer Brad Lidge. 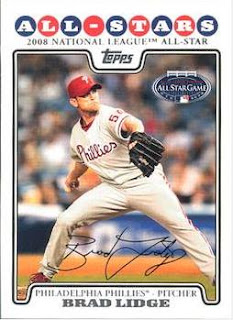 
Since 2003 the All-Star game has decided home field advantage in the World Series. Lidge couldn't know it at the time, but the NLs loss would cost the Phillies Home Field in the 2008 World Series. Fortunately for him the Phils and their fans like myself, The Phils took one game in Tampa and all 3 of their home games and didn't need HFA to win the 08 series.

Fox was throwing around some stat about how often the World Series was won by the home team. I wanted to look deeper into this and find out if the Home Team won or perhaps it worked out that the Home Team was the better team.  Here is what we found.

The Chart goes back 33 World Series and list the team that ended up being Away and Home for the Series - the team in Green won the series. 7 Game series are noted in yellow.

To the right of the chart a A '1' in a column indicates a win in a certain category. Those catgories and composite records are as follows

There are 2 things worth noting here, 33 series is not a huge sample size, but it isn't small.  The second is that the best team doesn't always have the best record.  And indeed it does seem to be the hotter team has been winning Series recently.

I will admit those two issues with the study here, but there are some astounding numbers.
1) The 2-13 record of teams w/ better records w/ Road Status. Thats abysmal. In fact it is worse than being the Away Squad and having the worse record in the contest (5-13)
2) I went back to 1979 just so I could find a game 7 that was won by the road squad.  There have been 9 Game 7s since then, every single one of them won by the Home team. Assuming both teams are near equal the odds of 9 home consecutive home wins is over 500-1.