FREE Tickets to the National @natsportsshow

And you FREE tickets - well sort of...

Over at Dave and Adam's Card World if you pick out anything over $75, they offer you a free gift.  Most of the items are fairly worthless - 5 retail packs of NC Tar Heels Hoop anyone??? - however currently one of the free gifts for a $75 purchase is a Ticket to the National.

So if you pick out say a hobby box of 2013 Topps Archives for roughly $64 and a 100 count box of binder pages you can get into the National for free. 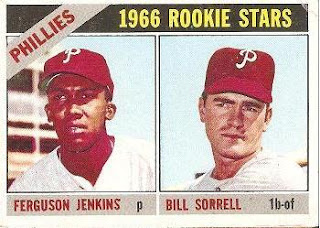 The National typically has a local flavor for autographs, among this years signers is Fergie Jenkins. He played for a lot of clubs, and is likely best known as a Cub.  His RC however was issued with the Phillies.

If your a Phils fan in Chicago for the national weekend, this may be the card you want to get signed.


Note - This is not an endorsement for D&A, just letting you know that the offer is out there.