A couple of division leaders going at it on ESPN this evening. A good night to feature a player that was an All-Star with both the Cardinal and Braves squads, Joe Torre. 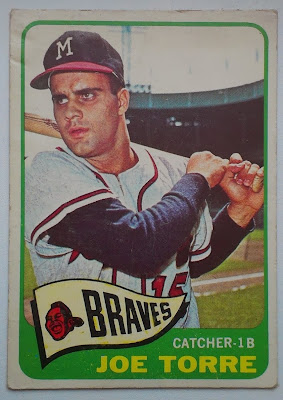 1965 Topps #200 Joe Torre
﻿
Torre came up to the Majors with the Milwaukee Braves in 1960, in 1961 he finished second in the Rookie of the Year voting to future Hall of Famer Billy Williams. He spent 9 seasons with the Braves (who moved to Atlanta in 1966) before being traded to the Cardinals for Hall of Famer Orlando Cepeda. In St Louis Joe Torre won the MVP award in 1971 with a standout season that saw the catcher move to third base and hit a league leading .363. That year he also led the league in Hits, RBIs and Total Bases.

His career which he finished out in 1977 with the Mets Torre had 2342 hits and 252 Home Runs. He was a 9 time all-star but never played in the postseason.

Those all at up to Sub-HoF numbers, but Torre would make up for his lack of postseason playing as a manager with the New York Yankees. He racked up 6 AL penneants and 4 World Series Titles with Jeter, Posada, Mariano, Andy Pettittie and crew.  As the skipper to the Bronks Bombers he took Manager of the year awards in 1996 and 1998.

At some point Torre will enter the hall as a manager, but lets not forget he was an MVP caliber player.

1965 Topps
We are just getting you prepped for 2014 Heritage. Shortly I am sure we will all get inundated with images of the beloved set. The set is a favorite for good reason and the #200 Torre card is a fine example. Colorful and Vibrant design with the waving pennant and a decent photograph of the Young Joe Torre.