The Phillies are in New York to visit the Mets and that gives us one last opportunity for an All-Star Game related post. It was great to see the Mets bring out Tom Seaver on Tuesday night. Despite being a Phillies fan I was always in awe of Seaver as a kid. His driving delivery and all those Ks really grabbed hold of my 10 year old imagination. 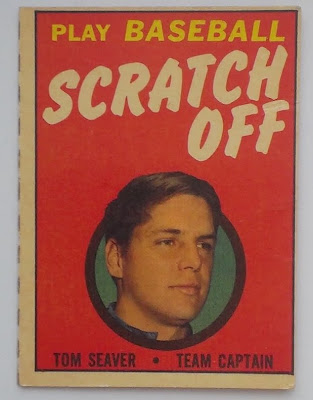 Seaver's Hall of Fame career really doesn't need redocumented by me - but I will quick-hit some highlights, 3 Cy Young Awards, 1969 World Champion, 1967 Rookie of the Year, 12 time All-Star, 311 Wins (100+ games over .500), 3,640 career Ks, 5 time strikeout champ. His Career pitching WAR of 106.3 is 7th all-time and still the all-time leader among folks that pitched during my lifetime in the non-steroid division - which means he is behind Roger Clemens.

Scratch Off
In 1969 and 70 Topps released a subset of scratch off cards. The set was limited in size (24 cards?) so it is all pretty much superstars. At a show I will pick up any HoF or name player scratch off card that is a buck or less. 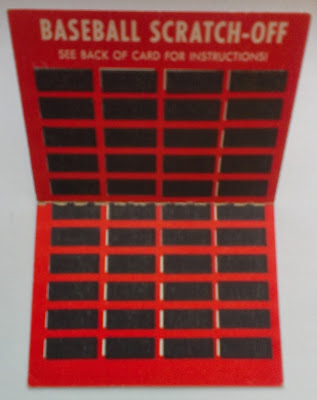 1970 Topps Scratch Off Tom Seaver (inside)


The scratch offs can be used to be pay a baseball game, fortunately this one is untouched.  I have flirted with the idea of using one of these for an online game, but have never been that ambitious.