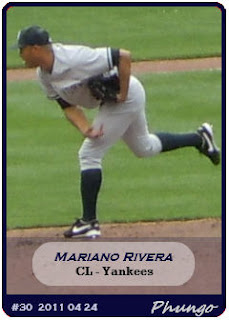 After Tuesday's night's Mariano LoveFest at Citifield and some discussion on Twitter today, we are taking a look at the Career of the games most prolific closers. It is basically considered a given that Mariano Rivera and his 638 Saves are destined for Cooperstown.

I won't argue that - but I want to look into a superlative aspect of that question.

Is Mariano Rivera a First Ballot Hall of Famer?

There are by my count only 5 HoF closers.  They are the first set below Super Mariano.  Among those 5 there is exactly 1 First Ballot Qualifier, Dennis Eckersley. Of course Eck had 2 careers, 1 as a starter and a 2nd as a closer.

As the only first ballot qualifier, Eckersley is probably the most important comp in this discussion.

How does Mo Stack up?  On the minus side Eckersley has his tremendous 1992 season in which he won both the MVP and  Cy Young Awards.  Rivera's best finishes are 9th and 2nd respectively for the two awards. In 2005 the Cy Young Award went to Bartolo Colon - depending on how you feel about PED use one could default the award to Rivera. The 2nd minus is in the career WAR column.  Rivera is 7 WAR wins behind. This is a conundrum in that the bulk(73%) of Eck's career WAR happened as a starter, yet it is accepted that he was elected to the Hall as a closer.

The Plusses are less debatable - granted the era's have changed but Rivera is almost 250 saves in front of Eckersley in career saves and counting. Finally there are the 5 World Championships.  Mariano Rivera has always been in a class of his own and this is the one number that truly separates him.

The Cy Young/MVP award is the only category that separates Rollie Fingers from Rivera.

Rivera outranks Goose Gossage in almost every category charted. Bruce Sutter perhaps the weakest of the candidates does have his 5 save titles v Mariano's 3 and a Cy Young Award.

Hoyt Wilhelm is close in WAR, but is somewhat in a different category as well.  It is also worth noting that Wilhelm was a 2nd place finisher for 1952 Rookie of the Year and lost 3 season to the service during the early part of his career.

Lee Smith, John Franco and Jeff Reardon
All good closers, none in Rivera's class.  Franco probably was dismissed from the ballot a bit early.

Out of the Past
During my research a couple of names came up that I felt as though were worth charting. Lindy McDaniel was a 1950s "bonus baby" who showed up on a number of comps. It appears that this resulted in a career WAR comparable to Sutter and Fingers.  Elroy Face was the career saves leader for a few years prior to Wilhelm taking over the category in 1964. Face also had his notable 1959 season when he posted an 18-1 record as a reliever.  Firpo Marberry held the saves record from 1926-1945. He was a member of the 1924 Washington Senators squad that won the franchises only World Series in DC


The Photo on Today's Phungo card is a bit of an oddity in that it is from a game in which Rivera blew a save in an April 24th 2011 game v the Baltimore Orioles. Brian Roberts hit a game tying single with 2 out in the 9th.
In the end the Yankees picked up the victory with a 3 run 11th.

As much as I regard the Yankees with disdain, Mariano Rivera is a first ballot HOFer... and he deserves it.

The Yankees will also make a big show of retiring his number, even though it's already retired (42).