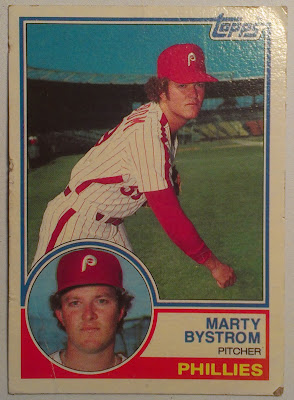 Marty had a tough 1983 season as a bottom starter in the Phillies rotation. So poor that Bystrom didn't get a start in the postseason. His sole inning was versus the Orioles in the final game of the World Series.  In 1983 the 24 year old Marty Bystrom was already on his way out of baseball. His 119+ innings in '83 were the most he would pitch in a season, by June of 1984 he was on his way to the Yankees in a deal that would return Shane Rawley. Bystrom got 15 more starts with the Yankees over two seasons then was done at the Major league level.

Philly Show
I doubt Marty would have made the cut for our Wheeze Kids series, but he is one of several Phillies in town to sign autographs at the Philly Show in Valley Forge this weekend. The show runs Friday 12/6 - Sunday 12/8 at the Valley Forge Casino. Admission is $8 - There may be a $1 off coupon in local papers.

Shane Victorino (CANCELLED - No notification by Hunt Auctions, PhillyShow, Sports Vault or WIP Radio)
It is not uncommon for The PhillyShow to have autograph cancellations and not keep their website updated.

There are card shows in December? Who has money for that?

(Yes, I know, not everyone waits until the last minute to shop).