Since it took all of two days to get through all of the former Phillies on the ballot, team Phungo is going to take a look at some of the other candidates. Today's feature is Larry Walker. 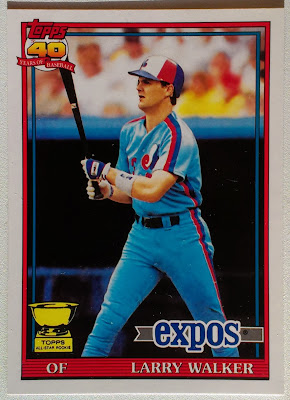 This isn't the Larry Walker Topps RC (It is preceded by 1990 Topps #757 plus a number of other cards by Score, Donruss, Fleer and others ) but not of those cards have the fine Topps All-Star Rookie Trophy.

Larry Walker is generally remembered for his decade with the Rockies, but he did come up with the Montreal Expos with whom he spent six seasons.  Walker is a career .313 HR with 383 Home Runs. Those numbers may have gotten a guy in the HoF a few generations ago, but that hasn't yet happened for Walker who is now on his 4th ballot.

Without checking I would not put Larry Walker in the HoF. Digging around in Baseball-Ref I found the following. Walker won the 1997 MVP award which he deserved according to WAR ratings. He had 2 Batting Titles (Coor assisted). His other LL included OBP, slugging, and OPS each twice and Homers once. His Awards mantle includes 7 Gold Gloves and a trio of Silver Sluggers.

The five time all-star was a part of 3 playoff teams including the 2004 Cardinals who took the NL Pennant before losing to the Curse-Breaking Red Sox team.

HoF related metrics on Baseball-ref
-Of his top 10 Sim Scores 3 are HoF (Snider, DiMaggio, Mize), 6 are either active or still awaiting HoF consideration. Only 1 is Out (Ellis Burks)
-His Black/Gray Ink test are both below the HoF average. Black is close - Grey not so much
-However is HoF monitor and HoF standards somewhat above the category averages

Phungo Verdict: HOF - This is a pleasant surprise, Walker ranks right at the average player for his WAR. His number may be Coors inflated, but from what understand WAR should account for this issue. Beyond WAR he has decent Sim scores and has always been represented as a good dude. The one drawback on his resume beyond the Mile High Home games is his lack of playoff experience and no World Championship.