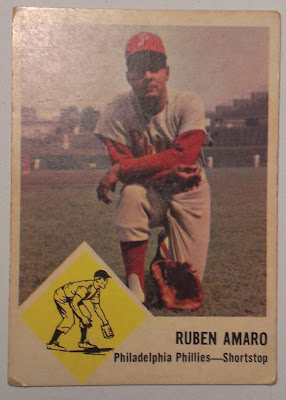 The December version of the PhillyShow was a bit of a mess for a variety of reasons. Shane Victorino was unable to make the show and the promoter failed to update their website.

There are a variety of reasons why cancellations might happen and it is usually excusable. Both local promoter Poppel and regional CSA (who run the Chantilly Show) seems to do a good job of keeping their customers updated.   At the PhillyShow I think there is at least a 50% chance of at least one guest no-show and I have NEVER seen a pre-show announcement by Hunt Auctions or Philly Show regarding a cancellation.  In Fact the Shane Victorino appearance is STILL on the Sports Vault website
(as of 12/17) 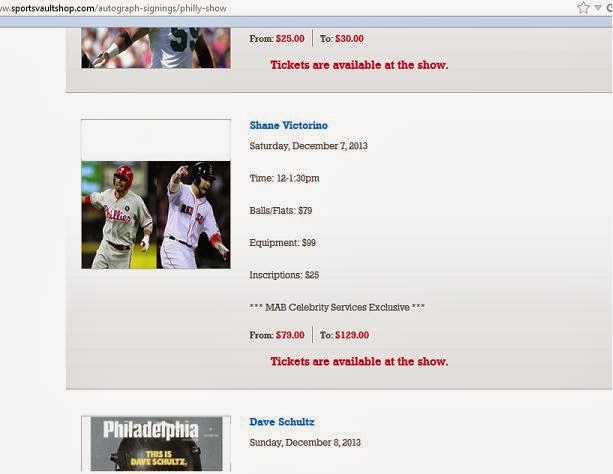 Okay enough of that drama. Lets talk about some cards - first up a couple of 1963 Fleer Cards

The Ruben Amaro card above is one of two 1963F Phillies cards that I picked up. The other was #54 Art Mahaffey. 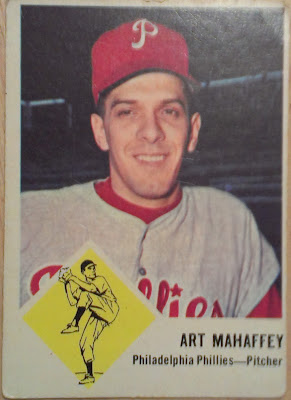 1963 Fleer is a set that I am fond of and at various times have consider building. The abbreviated set is a mere 66 cards - Due to a legal action from Topps, Fleer was only able to produce a single series. The series is significant for containing the first Maury Wills card.

There are five Philies in the set. The Amaro and Mahaffey cards seen here are the bookends for the 63F Phillies team set which runs from #50-54. The three middle cards are Johnny Callison, Clay Dalrymple and Don Demeter. If you want an easy to build Vintage Phillies team set, this may be the one for you - each of the above cards went for $2.