A few days ago the Phillies announce a few of their Non-Roster Spring Training Invitees. The names of the traditionally AAAA players included two familiar names. One was Hall of Fame offspring Tony Gwynn Jr, The other was our old friend Lou Marson. 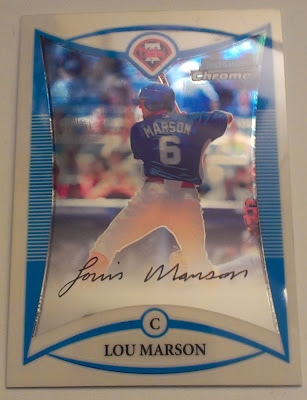 Marson got into a handful of games with the Phillies before being traded away in the first Cliff Lee deal.  Since then he has several unimpressive seasons with the Indians without eclipsing 300 plate appearances in any single campaign.

As mentioned above Lou Marson now finds himself on the fulcrum between AAA and the Majors sometimes referred to as AAAA, 4A or Quad-A. He has established he can play in the Majors if he is really needed, but he really doesn't have the skillset to hit/stay at that level. The Phillies have brought in Marson as depth behind Carlos Ruiz and the recently acquired Wil Nieves. Essentially Marson is here to replace the recently departed Steven Lerud.

Future Games Prospects have been a part of  Bowman Draft since the collections inception in 2002. BDPP has contains Futures Game base or subset cards in most recent series. However that is not the case in 2013.  I am bummed that this year the Futures Game is not represented with base cards - fortunately for Future Games enthusiasts there are FG Relics in the set.

Team Phungo has been lucky enough to attend a couple of Futures Games. I registered some random thoughts on the 2008 edition hosted by the Yankees here.