Tonight the San Francisco 49ers host the Atlanta Falcons in an NFL game that could be the last professional sports contest at Candlestick Park. The Stick was also home for the San Francisco Giants for 40 seasons.

Two years after the Giants abandoned New York for the Bay they moved into Candlestick where they remained for 40 years through the 1999 campaign. 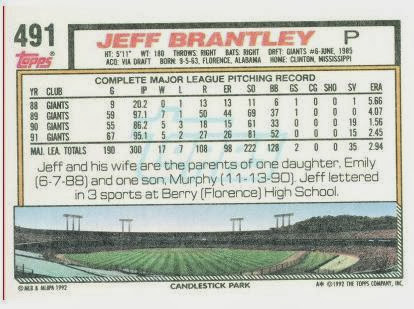 Tonight to honor the last game at Candlestick we post a card from 1992 Topps, which placed a small picture of the players home park across the bottom of each cards b-side.  The pix are small and it is pretty hard to distinguish one stadium from another, but it was an interesting idea.

Team Phungo made it out to Candlestick once, the game didn't go well for the Phillies. It did go pretty well for Kevin Mitchell (3-4, HR, 2B, 4RBI) 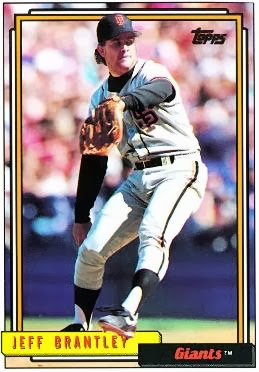 I figure since it's his card we will knock out a couple of quick words on the player on the card front. Jeff Brantley spent a couple of years at the end of his career with the Phillies including a 23 save season in 2000.

Candlestick Park hosted No-Hitters on consecutive days in 1968. On September 17th, Hall of Famers Gaylord Perry and Bob Gibson squared off with Perry getting the 1-0 victory for the Giants.  The following day the Cardinals returned the favor behind Ray Washburn who blanked the Giants 2-0.