My first thought when I saw the a Phillies player on an Emarald Parallel was Christmas. In fact for 2013 Topps Green parallels, I pretty much think that for any player who's team color is red. 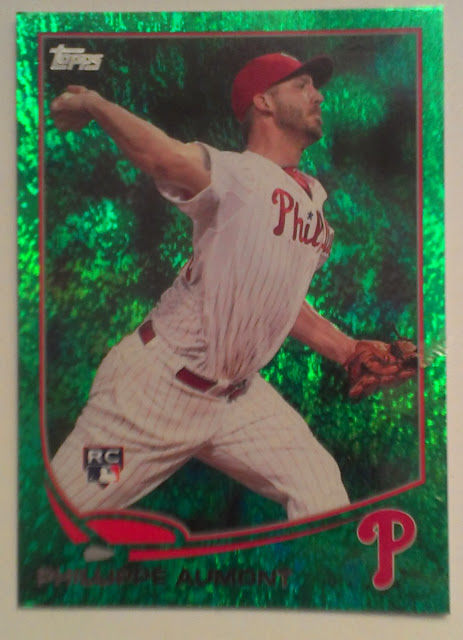 See What I mean. Not only are they green, but the chormium pattern/texture evokes a hybrid of tinsel and pine needles.

Phillippe Aumont has been an enigma for the Phillies since he was acquired from the Mariners in the second Cliff Lee deal.  Aumont was drafted by Seattle with the 11th overall pick of the 2007 draft. The hard throwing lefty has put up a respectable 1K per inning strikeout ratio at all levels including the majors. And his Hits/Inning ratio is equally good at about 1.0 H/IP. The trouble is his insanely high walk numbers - 13 BBs in under 20 IPs for the Phillies in 2013. He was sent back to Lehigh Valley where his walk numbers were even worse.

Statistically Aumont's problem appears to be more than just wildness. He simply will not trust his stuff. Aumont is yet to give up a Home Run in 34 major league innings.  As a professional he has never yielded a HR/9 of more than 0.7 in any of his six seasons. His H/9 numbers have never been above 10 for a full seaosn. He is clearly trying to hard to avoid contact.

Phillipe Aumont will be only 24 years old when the 2014 campaign commences and remains protected on the Phillies 40-man roster. The Phillies erratic bullpen could certainly use Aumont's power arm if he can sort out those high walk numbers.

Phun Phact
In 8 career play appearances (all in the minors) Aumont has but the ball in play once (sacrifice). His other 7 PAs have resulted in 5 Ks and 2 walks