Earlier this year Craig Biggio had a pretty solid HoF Ballot debut. He picked up 68% of the 569 votes cast in the 2013 election. This left him 39 votes shy of the 427 necessary for Hall induction. 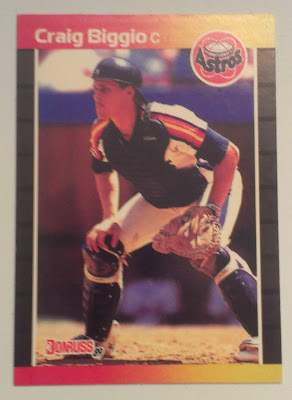 There are 28 MLB players who have 3000 or more career hits. 25 of those 28 are in the Hall of Fame, the other 3 are Derek Jeter (active), Pete Rose (ineligible) and Rafael Palmiero (in limbo).  Craig Biggio is on the low end of the club at 3060, but is good enough to rank him 21st all time.  Six of the 7 members of the 3000 hit club that are below Biggio were first ballot Hall of Famers - The exception is Palmiero.


Biggio's WAR/WAR7/JAWS numbers are all just below the HoF averages for second baseman. Part of this may be due to his many ABs at other positions. I don't think we should hold Biggio's versatility against him here - his other positions were basically Catcher and Centerfield - not like he was slacking over at first or DH.


1989 Craig Biggio
I am a fan of cards showing players outside of their typical position. The early Craig Biggio cards may be the King of the off-Postion cards. Unless you have done the pitcher/position player jump the best you can do is catcher. And here we have early cards of a potential HoF playing catcher - Love it.

Phun Phact
The first of Craig Biggio's 3060 career hits came off of Orel Hershiser in a game where he was catching future Hall of Famer Nolan Ryan.

Phungo Verdict: HOF - 3000 hit clubs, several other very good accumulator numbers at a middle infield position and respectable advanced metrics.  Honestly, I am not sure how Biggio didn't get in a year ago.