Tonight in our HoF ballot series we take a look at my favorite borderline candidate. 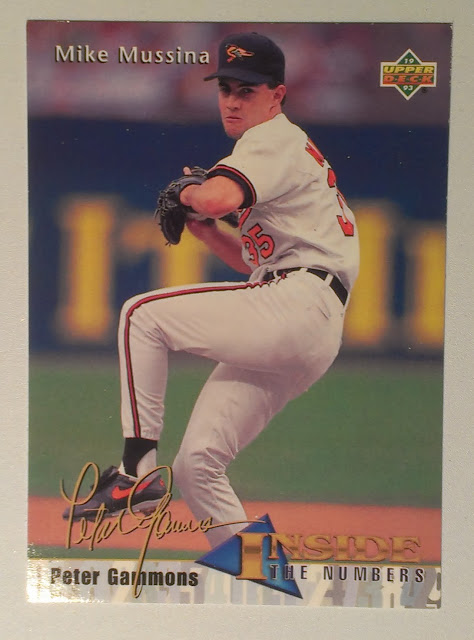 The Vote No on Mussina argument falls into 3 areas 1) No dominant season (no Cy Young Award), 2) His stats are largely Accumulators, 3) No Championships - an omission that is further exacerbated by the fact that he spent 8 seasons with the Yankees who bookended Mussina's tenure w/ World Series Wins on each end.

However...
-He may have never won a Cy Young Award, but he did lead the league in Pitching WAR in 2001.
-Mussina's Black Ink scores are very soft but his Gray Ink Test is quite strong. While not pointing to a dominant season, this does tell us that Mussina was in the top 10 of pitching categories often.  I think the accumulators argument falls flat largely based off of the gray ink.
-Finally in 2001 had the "Greatest Closer Ever" not blown a save, Mussina would have a World Series  Ring. 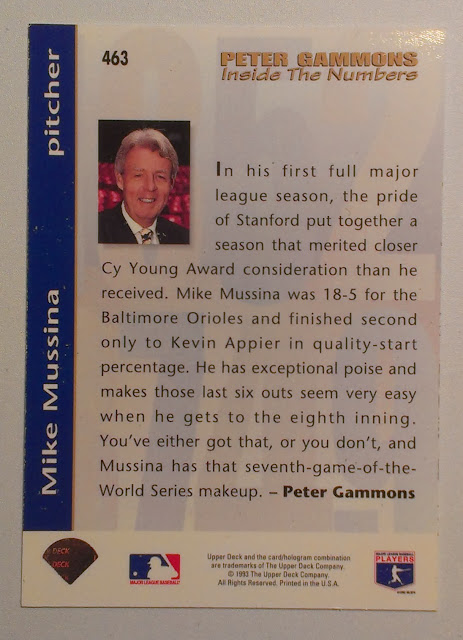 Inside the Numbers is a 21 card subset in 1993 UD (#450 - #470) with each card featuring a short writeup by HoF baseball journalist Peter Gammons. Clear back in 1993 Gammons referred to Mussina as having Game Seven Make-up.

The Phillies are represented by Dave Hollins, other players getting the Gammons treatment include Chipper Jones, Jeff Bagwell, Dave Justice, Bernie Williams, and Pudge Rodriguez.

Phungo Verdict: HoF - Full Disclosure, I met Mike Mussina in 2001. An acquaintance of mine is related to Mussina's wife. We didn't talk much but he was a real decent and polite guy. I am glad I met him and I was really happy to find out that he was good guy. So yes this may influence my opinion a bit, but I am happy to say that I think the numbers look HoF worthy on there own.