I hope to feature more Vintage Hall of Fame cards this year, and who better to start with then Phillies Icon Richie Ashburn. 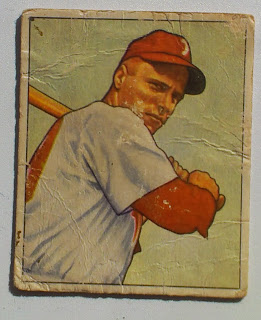 This card represents Ashburn just two seasons into his Hall of Fame career. As the youngest member of the the Phillies 1950 Whiz Kids squad Richie Ashburn batted .303 and led the league in triples(14). Unfortunately this regular season success did not career over into the World Series. Ashburn struggled at the plate batting only .176 and Phillies got swept in four games.

For The Collector
This is Ashburn's 2nd Bowman/Mainstream card and the earliest one in the Phungo Collection. It is in off condition with creasing and slight tearing on the front. I picked the card up via auction in March 2009 $16.49. This appears to be about where the card lives today. For the same price you could probably get the card in slightly better condition. A scan of recent ebay sales revealed the following pricing:

1950 Bowman
Always found the 1950B card backs annoying. They run counter-clock 90-degrees vs the A-side. 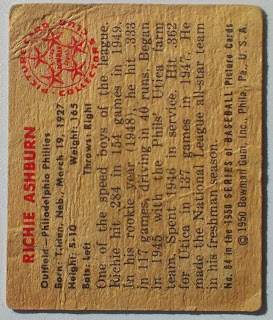 
This is common now. Topps runs all their b-sides Landscape, while the front is typically Portrait (with a few landscapers mixed in). The trouble with 1950 Bowman is the card is so close to square (2 1/16 x 2 1/2 in) that it just feels like you should be able to flip them over and read them.

nice ashburn! I need to get one of those!