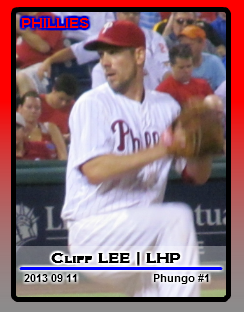 2014 Phungo #1 Cliff Lee
The #1 card this year goes to Cliff Lee. Once again the Phillies poor season made it hard to pick out a subject for #1. Cliff Lee ended up being one of the strongest players on a mediocre team.

The 2014 Phungo design was hard to come up with. The basic layout was done early in 2013, but everything didn't really fall together till this past fall.  Experimenting with Layer Styles for fonts really helped get what I wanted. The border with the team color (red here) fading to a grey bottom does evoke 1987 Fleer a bit - I don't have a problem with that. Beyond that, I have used the teams accent color to shadowed the nickname and also as a text divider in the Player Name and info box at the bottom of the card. Once again the date of the photo is on card along with a specific player position.

This years base set is 66 cards and includes baseball players, other athletes, statesmen, authors and entertainers. Over the next couple of weeks I will posting some highlights.

I hear that these things actually find their way into the hands of collectors. I'd love to find out how to make that happen. I love custom cards!