To mark the 80th birthday of Bill White we are putting together a quick posting. Those of you expecting 2014 Topps will just have to wait a bit. 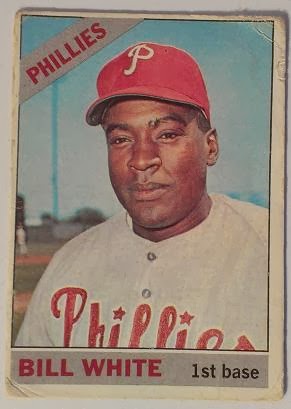 White is known as a Cardinal, but he did spend a few years (1966-68) at the end of his career with the Phillies. He was a member of the Cardinals squad that overtook the 64 Phillies team we have been highlighting recently. Those Cardinals went on to beat the Yankees in the 1964 World Series. Other highlights of the First Baseman’s distinguished career include making 8 all-star teams (over 5 seasons), posting four .300 seasons and a like number of 100 RBI seasons and collection 7 Gold Gloves.

His best season with the Phillies was 1966 when he posted 103 RBIs on 22 HR with a .276 BA. He won the last of his Gold Gloves that season, all good enough for a very solid 5.3 WAR. Among contemporary players he compares most similarly to Aubrey Huff.

Post Playing Career
White went into broadcasting even before his career was over, hosting a radio program while with the Cardinals. This helped him land post career gigs behind the mic with the Phillies and Yankees. White spent 18 years with the Yankees and has specifically mentioned enjoying the opportunity to work with Phil Rizzuto. In 1989 While was elected to the Office of NL President, a post he held until 1994. In 2011 White published his autobiography “Uppity: My Untold Story About the Games People Play” covering his live in baseball including his playing days and stint as commissioner.

According to his Wikipedia entry Bill White still lives in the Philadelphia area.

1966 Topps
At card number #397 Bill White falls in a mid Number series for 1966 Topps. Cards 371-446 are the lowest and most common of the sets 3 mid/high series. Typically I look for a price point of $1-$1.50 for cards in this # range, for comparison I would expect the 66 commons (low numbers) to be found in the a 3 fer a buck bin. Those prices would be for an off condition card similar to the one pictured - soft corners, possibly light creasing.

White started out with the NY Giants. I think he went into the service, and when he came out, the Giants had replaced him with Orlando Cepeda.

I think White was the NL President until the commissioner/owners abolished the 2 league presidents.

J/D, That makes sense. The leagues started to mix more by then, and apparently White didn't get on well with commissioner Fay Vincent.