Just some quick 2013 Clean up here.  Last year we honored the Phillies Wheeze Kids who took the 1983 NL pennant.  Over the next couple of days I want to knock out a couple of folks I didn't get to during 2013 proper. 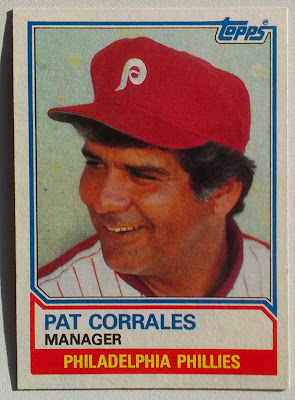 Corrales was the Phillies manager for the first half of the 1983, He was fired 85 games into the season.  The Phillies were tied with the Cardinals for first place, the day Pat Corrales was fired (albeit only a game above .500)

1983 was only the 2nd year for Corrales at the helm of the Phillies after replacing Dallas Green.  Taking over for the man who had won the teams only World Championship is a tough task. This makes me nervous for Ryne Sandberg tyring to replace Charlie Manuel - that and the fact that the average age of this years squad will be about Pat Corrales age today.

Corrales had one more managerial stint after leaving Philadelphia - He led the Indians for 5 seasons, never finishing better than 5th.

Currently Corrales(age 72) is working in the Dodgers organization as a Special Assistant to the GM.