2014 marks the 50th anniversary of the 1964 Phillies. The team is primarily remembered for their collapse, losing ten games in a row and a 6.5 game lead during the final two weeks of the season. It should also be remembered that the 1964 squad is the most competitive team the Phillies fielded between the 1950 whiz kids and their late 70s playoff run. 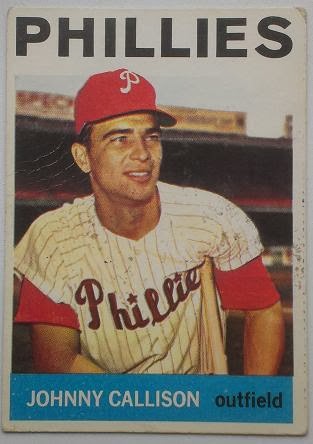 We kick off our 1964 Phillies series with a look at fan favorite Johnny Callison, who likely would have been the NL MVP had it done been for the teams collapse. Callison finished 2nd to Ken Boyer who played for the Pennant Winning Cardinals.

For 1964 Callison's offensive numbers included 31 Home Runs which ranked him 3rd in the league, 104 RBIs (4th), and 101 Runs Scored (6th). On the defensive side of the ball Callison was impressive as well, leading RFs in Putouts, Assists, and several advanced metrics including Range Factor, Zone Runs and Fielding Percentage.

Callison made his 3rd of 4 all-star teams in 1964 - and it is a good thing he did. Callison tagged Dick Radatz for a 3 Run Wall-Off Homer that gave the senior circuit a 7-4 victory at Shea Stadium. It was the first time a Phillies player had ever homered in the All-Star Game.

From 1962-65 Johnny Callison put together four great season. He clubbed 112 Homers during the span logging a WAR of 6+ each year. He played a minimum of 157 games each of those seasons and was a significant offensive force for the Phillies throughout the era. Unfortunately Callison's offensive production fell off after that period. The Phillies traded Callison following the '69 season and he finished his career playing for the Cubs and Yankees.

Johnny Callison Died in 2006 at the age of 67. When the Mets hosted the All-Star game this past summer, Steve Wulf wrote this terrific piece on Johnny Callison for ESPN.com to commemorate his Game Winning HR in the 1964 all-star game.

I haven't made an official collecting goals list but I think I'll work on adding to my Callison collection this year. I have most of the 1960's cards and the 2003 Pride of NY auto. Are there any relic cards out there? I don't think I've ever seen one. There should be.