On Friday we ran the clean up on the 1983 Wheeze Kids series, today we finish looking at the 1983 Topps RC set - A 3 post feature, which I was to lazy to finish. 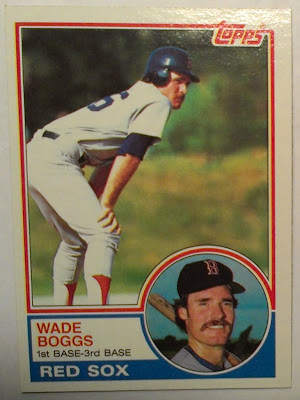 
3000 Hits, a World Championship, 5 batting titles, and a 12 time All-Star.  Wade Boggs was also the 1986 and 1988 O-WAR champ. In 1986 Boggs finish 7th in the MVP voting which was taken by teammate Roger Clemens, Fellow Red Sox player Jim Rice also polled better than Boggs. The 1988 award was taken by 40/40 man Jose Canseco. Once again in '88 Boggs(6th) was outvoted by a teammate - Mike Greenwell

For The Collector
There are only several million 1983T complete sets out there, consequently the sets HoF RCs are pretty affordable.A check of recent auctions revealed the following: