Tonight we move on to our second installment on the 1964 Phillies with a look at second baseman Tony Taylor. 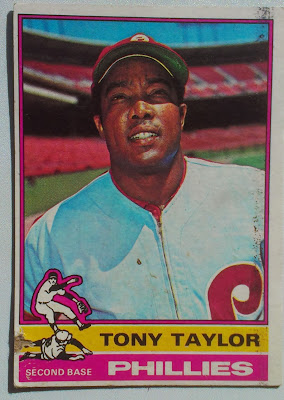 For Tony Taylor 1964 was a perfectly average season in what one would have to consider a very average (albeit lengthy career). In ‘64 He batted .251 (career .261) with 4 Home Runs and 64 RBIs. He’s lack  of power was evident in his final numbers that reflected a higher OBP (.320) than SLG (.316) His 81 OPS+ was a tad below his career number of 88. Clearly Tony Taylor got to play everyday because of his glovework in the middle infield. Throughout  the early 1960s Taylor was a steady defensively and finished near the top of the league in a myriad of different statistical categories. For the 1964 season Taylor finished 3rd in the league in Assists, Putouts and Double Plays.

That defensive play would be what would keep Taylor in the big leagues for 19 years (15 with the Phillies) – He never batted above .284 in a qualifying season, his career High in RBI was 55 in 1970.  The most home runs he hit in a season was 9, yet he stuck around long enough to hit 72 of them. He did play long enough to accumulate enough Putouts, Assists, and Double Plays at second to rank him in among the top 60 players all-time for each category.

Tony Taylor retired in 1976 and 27 years later he remains the Phillies franchise leader in games played by a player who primarily played second base. Taylor was inducted into the Phillies Wall of Fame in 2002. The 78 year old Taylor still regularly makes his return to the Phillies Alumni weekend.


1976 Topps
Tony Taylor was 28 when he played for the 1964 Phillies, which made him the 2nd oldest everyday player on the team, Yet he was still around in 1976. According to my limited research Taylor and DIck Allen were the last two players from the 1964 team to be issued a Topps Card  in a Phillies uniform.

One other note on 1976 Topps - It would only take a dime or maybe even a nickel to upgrade this card.

Taylor and Allen returned to the Phillies in the mid 1970s.

yep - I had neglected to mention both Taylor and Dick Allen were returnees to the Phillies when they played with the team in the 1970s.