Team Phungo will be rooting for the Seahawks in the NFC half of Championship weekend. To show our support we post a Phungo Card from the Seattle baseball squad. 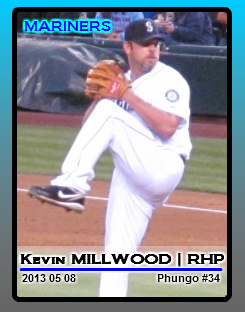 When we had the Team Phungo Seattle road trip, I was a little bummed to see Kevin Millwood as the starting pitcher for our game. He sort of symbolized some really crummy Phillies teams and he never lived up to being an Ace while here. Truth is Millwood is more of  a decent 3 maybe a 2 starter.

Initially Millwood ended up on the discard photo pile, but I rechecked his numbers and the man had a decent career. In 1999 he was the best pitcher on the Braves NL Championship squad, and finished 3rd in the Cy Young voting. While pitching for the Indians in 2005 he won the AL ERA title and finished 6th on the Cy Young ballot. He authored a No-Hitter with the Phillies and started a second one while with the Mariners.

2014 Phungo Card
This card has the first error I have spotted, This pix is from a game played May 8, 2012 not 2013. These are the things that happen when you defer a card for a year. Other than that I am happy with the card even if it is a touch blurry. The light blue to grey fade is pretty sharp and catching a pitcher at this point in his motion always looks good on a card.

The card number is 34 which Millwood wore for much of his career including his Phillies stint. It is, however, not his Mariners number which was 25. Once again on the Phungo cards we differentiated handedness for pitchers, RHP for Millwood. The line beneath the player name is a dark blue rather than the light blue border as a nod to the Mariners accent color.