I perused the BadWax autograph event list a few weeks back and found out that Marty Bystrom was signing autographs at a Nursery (botanical), of all places, near me. I had a little bit of free time and decided to check it out. Well......Marty Bystrom couldn't make it but Dickie Noles was good enough to show up in his absence. It turned out that Marty was in a golf tournament that weekend and figured he would only play on Saturday. Well Bystrom played well enough to qualify for the final. Regardless the signing was great. I showed up near the end and there was only one other person there that was really interested in the signing, everybody else was in the employ of Main Line Gardens near as I can tell.

Noles told a couple of stories and made several comparisons between the players of today and his own era both talentwise and money wise. Noles is still employed the Phillies and works for both their minor and major league teams. He also had several anecdotes about Phillies Dream week, which could almost get me to shell out the 4 or 5 grand it takes to go down there.
Noles was good enough to pose for some pictures and sign a couple of items I brought as well as a postcard provided by the venue. I am not sure but it appeared that Main Line Gardens may be somehow connected to the now defunct BC Collectibles. There were a couple of small display cases of autograph items and they appeared to be labeled the same way that one may see them in a BC Collectibles store. 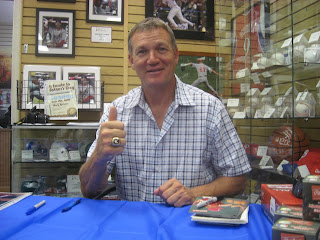 This is a picture of Dickie posing and displaying his World Series Ring. As he said he has done this before and he has the pose down.

Main Line Gardens was hosting the signing as part of a Father's Day promotion, I hope they have additional signings. Thanks to them, Dickie Noles, and thanks to Bad Wax for publishing the listing.
Posted by deal at 12:47 PM

Its funny there are a lot of signings where only a few people show up. Franco Harris was signing in Seattle of all places and only 7 people showed up (all thanked me for posting it on the site). Thanks for the shout out it is truly appreciated.

Great story. Congrats on the success.