It is amazing what a difference a World Championship makes. All of the sudden the burden of the 1993 World Series loss didn't seem as great. And this week when the Blue Jays return to Philadelphia I am sure that I will see Mitch Williams and Joe Carter several times on TV. But it won't hurt as much this time. For Phungo 5 we are talking with the aptly named Blue Jays Card Blog. .

1) Please, Tell me one bad thing about Joe Carter
The name Joe Carter amongst Jays fans is sacred. Joe Carter is a hero, a leader and a Blue Jay Legend. There is not a single bad thing that can be said about Jolt'n Joe Carter! I guess the only bad thing I could say about Joe, which isn't even bad, is the fact that he didn't retire a Blue Jay. I would loved to have seen him finish his career in the Blue & White. Joe Carter is to Blue Jays baseball what Michael Jordan is to Bulls basketball (if that makes sense)

2)What has to go right other than Halladay staying healthy and dominant for the Blue Jays to stay in this thing?
For the Jays to remain a contending team they need to continuing seeing the ball and hitting it. There is not a single consistent long ball hitter on the team which doesn't seem to be a major issue. There is just a collection of guys that will get many clutch base hits. Also they need to remain healthy, the jays always seem to be dealing with injuries last season it was Aaron Hill, Scott Rolen and Vernon Wells. This year it seems to be the entire starting pitching rotation aside from Doc (knock on wood that guy stays healthy.) 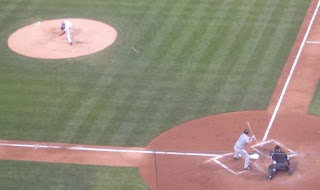 
3)Bigger Hassle at the dome Bosox Fans or Yankees Fans?
I love Bosox Fans, they always make the trek north of the border wearing the Red & White heckling and cheering in their Bow-stan accents. Yankee fans aren't really a hassle either, it is more so the flip-flopping locals who put their Jays hats away and cheer on the Yankee's when they are in town (for the most part Toronto is a city full of band wagoners)


4) How is that Dexter Fowler collection coming?
The Fowler collection is coming along nicely, trying to trade or ebay for a by the letter auto patch! Also going to try my luck at a TTM for the lovely lady. I have no idea where this love affair came from but hey, it has her loving baseball a little more.

5)And the Question I run by all my Canuck bloggers - SCTV or Kids in the Hall?
This has to be the hardest question out of the bunch SCTV opened the doors for so many great Canadian comedians like Candy, Levy & Flaherty to name a few. But if I had to pick one it would have to be Kids in The Hall. The humor on Kids in The Hall was so bizarre and off beat. The eradicator has to be one of my all time favorite sketches, i think I know it word for word. "30 Helen's" would agree with me on that one, Kids in the Hall takes the cake.


Final Note....Don't mess with Alex Rios especially after he is punched out 5 times in a game (FYI - NSFW - language)

ed note on # 2: Unfortunately I got these responses prior to the Friday Night game attended by Blue Jays Cards when Roy Halladay came up with a (hopefully) minor injury. As of now it looks like he will only get pushed back in the rotation, and as much as I would have loved to see Halladay pitch here this week.....well, it is probably just as well for the Phils that they don't have to see Roy Halladay right now.
I may have recovered from the 1993 World Series, but I have not forgotten it, so no matter how big a Legend Carter is in Toronto, I just can't award a point on Question number one. And I am old school, I have to go with the SCTV guys for question 5. Still a strong 3 out of 5 for Blue Jays Cards. Thanks again for helping us out, and best of luck to those Jays hanging in there in that always tough AL East.


We will have another Interleague guest this weekend as Beardy stops by for a chat,
For a look back at a previous Phungo 5 with Thoughts and Sox click Here.

Post Script: Team Phungo was at the Jays Phils Debacle on Tuesdasy night, I don't know if I will get a game report up, but once again it was a loss but it was still a good time. Until then enjoy the Hamels/Rolen photo above.

And after Tuesday they lost twice more to the Jays. Yikes.

Joe Carter, I haven't gotten over him yet nor Mitch Williams.