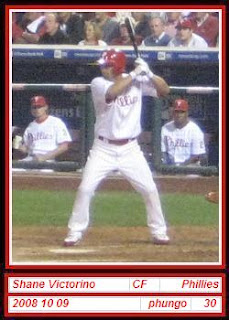 This Saturday is Independence Day and it will also mark the 70th anniversary of the "Luckiest man on the Face of the Earth" speech made by Lou Gehrig on July 4th 1939.

This Saturday the Phi Delta Theta International Fraternity of Oxford Ohio will honor Shane Victorino with the Lou Gehrig Memorial Award. The award is given annually to a player that exemplifies the Giving Character of Lou Gehrig.

There was a time a few years ago I would of thought Victorino would never be more than a footnote in Phillies history. I think now that he may one day become one of the teams leaders. Congratulations to Shane, I am glad to see he has earned this honor.

This Phungo card photo was taken during game one of the 08 NLCS. The Phils beat the Dodgers 3-2 that day, Victorino went 0-4 but did score on a Chase Utley Home Run after reaching on a rare Rafael Furcal error. The Phungo Card has the specific position of CF and I gave Shane a hero number of 30.

It has been 68 years since Lou Gehrig died. There remains no cure for ALS better known as Lou Gehrig's Disease.
Posted by deal at 9:20 PM