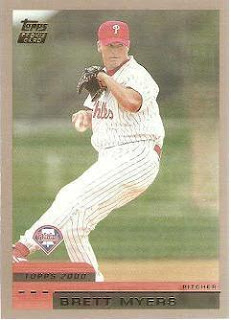 Brett Myers went on the DL last week with an "Inflamed Right Hip" which will require surgery. The timetable for the injury is 10 to 12 weeks. I am not sure, but I think that is the amount of time he will be out before he can begin resuming pitching workouts. This means that there is a fair chance that Myers is done for the year.

I have mixed emotions about Myers. He has pitched well in stretches, and has also had sequences of equally miserable outings. He has had his share of grumbles and he may have only grudgingly accepted his assignments from the Phillies - but whenever he finally did accept whatever role that may be, Myers often excelled. He has been an innings eater, a Quality Starter, and a Closer and done all of those things well at times. His 2008 post season accomplishments included beating C C Sabathia both as a Pitcher and as a Hitter in game 2 of the 2008 NLDS.
And then there is the off the field Brett Myers, who once was arrested for a public altercation with his wife outside of Fenway Park in Boston. He has always been emotionally charged, which works both for and against him as a pitcher. I am not sure that he is any better at keeping those emotions in check off the field.

Brett Myers is in a contract year, and his season may be over. This means that there is a chance he may have thrown his last pitch as a Phillie. That doesn't sound fair, but that is part of the game.

I hope that Myers can return to the Phils. His past experience both as a starter and a reliever certainly allows him more avenues to contribute should he be able to return this year. If Myers comes back and is unable to start but can give the Phils some quality relief appearances that is certainly a better option than to having to trade for a Right-Handed Setup guy down the stretch.
Posted by deal at 10:53 PM

It sounded to me like he was done for the year. Is there serious talk in Philadelphia about the Phillies making a play for Oswalt?

there really isn't serious Oswalt talk yet - his name is grouped in with a bunch of other maybes like Peavy. The more serious names are lower tier players like Erik Bedard.