When I returned to baseball cards I made the decision to attempt building a Vintage Topps Set. The set I picked was the 1959 Topps Set. At the time it was the upcoming Topps Heritage Set, I like the looks of them - It was the last set to contain Richie Ashburn as a Phillie, and it was from the '50s which has a bit more cache then saying "I am collecting the 1960 set".

I recently reached the half way point and have just received contributions from two different bloggers. About a week ago I posted about a card sent in a package from Night Owl Cards. And this week I was very happy to find another nice group of cards from the Orioles centered Beardy's Baseball Blog.

Up until now almost all of the cards I have built the set with have been via eBay and Card Shows. I like the cards I get via trades twice as much though. I am sure not to many folks have extra 1959s around but if you do I am definitely willing to trade for them. I have lots of duplicates from the sets, and if anybody is interested in those I will also entertain trade offers.

I noticed about a month ago in a post that Beardy had picked up an eBay lot of 1959 Orioles. The batch contained some duplicates. We made a trade where I sent him one of the O's High-Numbered All-Stars, Gus Triandos, along with a few Markakii (hope I got that right) and he sent back a bunch of his '59 dupes which also included a few Red Sox cards. 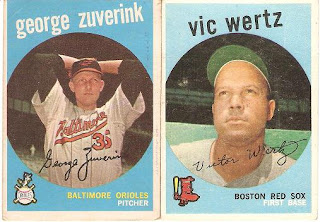 I love the Zuvenick card and a couple of other O's cards in this set because they have the classic Orioles uni with "Baltimore" written across the front. This season the O's have gone backto wearing these uniforms when on the road.

I am chronicling my quest to build the 1959 topps set on my Trade List Page in this posting. As of today (2009 06 14) I have 344 of the 572 cards or about 60% of the set. If anybody has any 1959s that I could use please let me know and we can make a deal. I also have a list of my 1959 doubles but that list needs to be updated as several of these have been sent out over the last couple of months. I have several other lists of sets that I have started or am in the process of building throughout the SetQuest page if you see anything that you have to offer let me know and perhaps we can work a deal.

Thanks to Beardy's Baseball Blog for helping out with building the 1959 Topps Set, it is much appreciated - oh and Beardy, The Phils are hosting the O's next weekend, I think there is a good chance of seeing a Phungo 5 questionairre in your email soon.
Posted by deal at 12:11 PM

What a great set. Good luck in your quest!

Oooooooh I love that little Red Sox logo...since they introduced Wally as the mascot, I've been boycotting him for a pair of those Sox.