Ok Phils got clobbered, it rained and game after midnight. A year ago I would have been completely bonkers upset. The Phils winning a World Series has changed all that. I had a great time on Saturday Night. Got a couple of good pictures, enjoyed an otherwise miserable game and was really happy to make it back to the ballpark for only the 2nd time this year.

The above shot is really nice. It is not very often that I take pictures of closers, largely because game situations are often too tight and I would rather watch the game then snap a picture at that point. Saturday the Bosox were up 5 runs so the situation was less dramatic. This shot is of Papelbon pitching to Chase Utley. It is always great to get a picture that features two Superstars in a single shot. You can also tell this is mid pitch and if you enlarge the shot you may make out a white blurr that is the ball - it's just below first base.
I got one other shot of Papelbon. The 2009 Phungo Set didn't have any Red Sox cards included and at least one blogger noticed. I am not giving away any secrets on who might be on the 2010 checklist, but I am thinking the photo below may be good enough to make the cut. 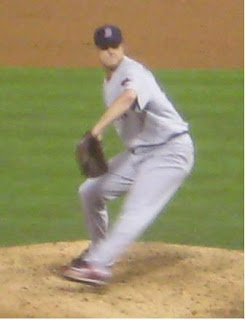 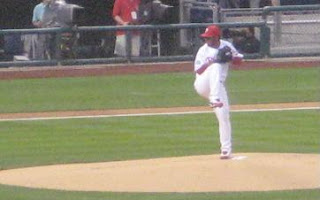 Antonio Bastardo only pitched (or attempted to pitch) one inning, but I was able to get a picture of him, for what might be one of his few appearances at home all year. 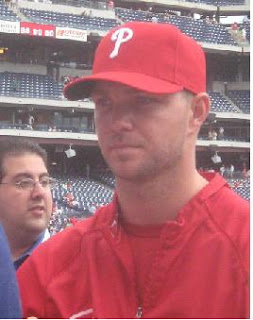 Good Guy Awards: Ryan Madson was leading the Good Guy parade on Saturday Night. Jack Taschner and Clay Condrey were also signing autos. When the Bosox are in town they are among the few away teams that fill up the autograph area more than the Phillies Fans. The only person I saw signing for the Red Sox was Brad Penny. There was one other Boston player signing close to game time but I never identify the player.


And For The Card Collectors:

The Phils have giant baseball cards viewable from the Center Field entrance which display the nights lineup for fans. The cards had not been updated since 2006. This year they are new!! 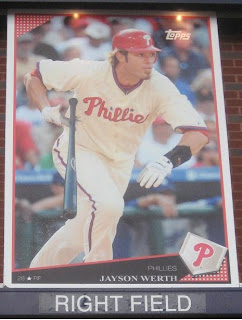 Scoops - Brad Lidge was out long tossing prior to the game. Photo is a little grainy but the knee looked ok to me. Also John Smoltz was at the game and in uniform (#29) but I wasn't quick enough to get a picture. 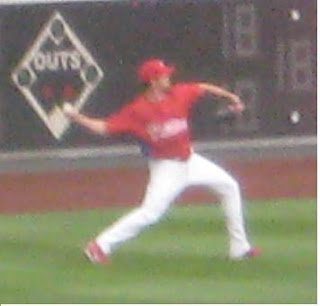 Couple of other curiosities. Mitchell and Ness (and maybe Topps) were running some promotion that bordered on gambling. They were selling baseball cards and then based upon the numbers of the cards you received you could win a prize. For example they would pick a card numbered say 421 and if you had a card bearing that number in your pack you would win that rounds prize. Which amounted to some pretty nice stuff - signed jerseys, tickets, and various giveaway items. The area was marked with a couple of Topps Attax posters, but I never figured out if Topps was tied in with the promotion or not.

The other one was, I am sure you have seen this before the "Between Innings Marriage Proposal". Well what made this one a little different is the girl being proposed to was holding and infant. Maybe it is just me thinking this but it appeared to me that the Phils cut away from the shot a lot quicker then they would normally. Of course there is no guarantee that the child belongs to the bride to be, but I have been to an awful lot of ballgames, and it definitely was something I hadn't witnessed before.

While the game was in Rain Delay the Phils broadcast the Braves @ Orioles game. Props to the Braves broadcast for noting the way that "progress" had eliminated one of the great views in baseball when new constrution was erected to obscure the Baltimore's Emerson Bromo-Seltzer tower . 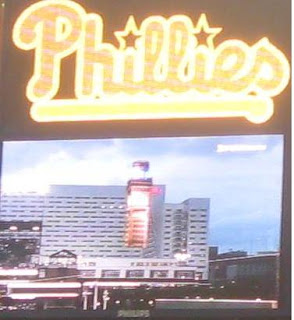 It was about time they replaced those Starting Lineup cards. That was really beginning to bug me!