I am very happy to have Dave from Fielder's Choice for the Tampa Bay Rays edition of Phungo 5. First off Fielder's Choice is one of the most read card blogs out there, and for good reason. The posts are always interesting and well thought out. Also last year when the Phillies and Rays met in the World Series Dave and I had a wager on the outcome that included a guest column. Dave was good enough to write a great piece on Mike Schmidt, which many of you have read and subsequently boosted Phungo Readership.
Well, a lot has happened since the 08 World Series and the Rays and Phils both come into their interleague match-up a little hobbled.

1) Are you still happy with the Pat Burrell Signing?
At this point, I am definitely not happy with Burrell. He's basically stealing the Rays money and producing nothing for them. A big reason for this is that he missed about a month with a neck injury and supposedly, the neck hindered him even before he went on the DL. But his .299 slugging percentage (as of 6/17) is simply inexcusable! The fact that he can't play in the field because he is such a lousy defender makes him even less valuable. Now, on the other hand, I am aware of how streaky he's been in the past, and my feelings will totally change if he starts to get hot. I don't think his home run total will remain at 1 for very long. A week or two ago, if you had mentioned the name "Gabe Kapler" to me, I would have gone on a long rant about how worthless he was, and now he's one of the Rays' hottest hitters. I hope to see the same change from Burrell soon...To answer the question in another way, in hindsight, the Rays should not have signed Burrell - no matter what his production the rest of the season is. It turned out that they could've signed a similar player for less money (like Bobby Abreu's contract with the Angels) or they could've relied on internal options like Zobrist/Aybar/Kapler/Gross/Joyce to fill the DH slot. 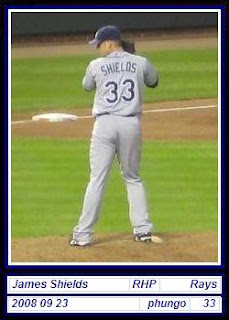 2) What player needs to step up to get Tampa back into World Series form?
Since the Tampa Yankees are a minor league team, I don't see any way for them to get into the World Series. If you mean the Tampa Bay Rays, the major league team that plays in St. Pete, the easy answer would be B.J. Upton. He got off to an atrocious start, and now that his bat is heating up, the Rays are enjoying a 6-game winning streak. But even with his bad start, the Rays were still leading the majors in runs scored. So the real problem has been pitching, and my answer to the question is Scott Kazmir.Kazmir went from an All Star last year to having a 7.69 ERA and 1.95 WHIP this year. His struggles led to short starts, which caused the bullpen to be overextended, which caused the bullpen to struggle. He's been working on fixing his mechanics while he's been on the DL, and he's due back soon. If he can pitch like the Scott Kazmir that we've seen in years past, then the Rays are suddenly looking at a very good 5-man rotation with Kazmir, Shields, Garza, Price, and Niemann. Andy Sonnanstine can head to the bullpen and be the long man, and Lance Cormier, who has been extremely good as the long man, can move to a late-inning role. Hopefully this will make the pitching as good as it was last year, and with the hitting being much better than it was last year, the Rays can return to the World Series and win.
3) Name a new activity that you have picked up since you have gone into blogging retirement, and what activity have you resumed from your pre-blogging days.
I don't think I've picked up any new activities, but I have much more time to do many things that I consider important such as spending more time with family and friends, helping to keep my house clean and organized, planning and preparing to have kids, and improving my health by exercising more and eating more nutritiously. I've also been putting more hours into my job. This week, my wife and I are planning the details of a vacation in late July. I'm planning to see the Rays play in Toronto and attend The National in Cleveland!
4) ok here you go - I know that you have moved to collecting singles/autos via auctions but if you were to spend $100 on a cards products ex) box (or boxes) what would you buy (it can be 1 pack/box or multiple boxes or even a couple different products) Just has to be roughly $100 worth.
Well, since I don't really like any of the 2009 baseball card products, I'd take my chances with a hobby box of 2006 Bowman Draft Picks & Prospects to see if I could pull one of the insanely valuable Evan Longoria autographed refractor parallels. Even if I didn't get Evan, there's some other really good players on the checklist too. Now I have to get this out of my head as soon as possible so that I won't head to eBay and throw away some perfectly good money on a box ...
5) What's your Favorite Creamery flavor?
Definitely Peachy Paterno. I know that's the easy answer since it's the most famous flavor, but it's amazingly good and I can't get anything quite like it anywhere besides the PSU Creamery. And it has peaches in it, and peaches are fruit, and fruit is good for me, so I can convince myself that Peachy Paterno ice cream is healthy! Now my mouth is watering, and I can't wait to get up to PSU this fall and stand in line for two hours to get some.
%%%%%%%%%%%%%%%%%%%%%%%%%%%%%%%%%%%%%%%
Well it isn't exactly a blogging return, but it was definitely nice to hear from Dave and it sounds like he and the entire Fielder's Choice crew are doing well.
I will give him a 5 out of 5, but I must mention on Q3 that I always hate to hear that people are putting more hours into their Jobs, alas I understand it is a necessary evil in our day to day card collecting survival.

Thanks to Dave for checking in with us.

I am curious if you what questions would have posted for Dave's Phungo 5. Please Comment.

If you would like to see a previous Phungo 5 click here to see are interview with Beardy's Baseball Blog.
Posted by deal at 7:17 PM

Thanks for including me in the Phungo 5! Tonight's game was completely awful...