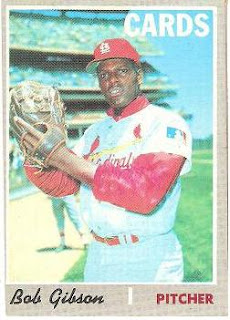 This week Philadelphia Phan Favorite Jamie Moyer tied the immortal Bob Gibson for career wins at 251. Of course it took Moyer 6 seasons and roughly 120 more games to accomplish the feat. Still it is an impressive accomplishment.

In addition to being a great pitcher Gibson was also a good fielder who collected nine Gold Gloves and competent hitter with 2 World Series Homers on his resume.

There are a variety of Bob Gibson Autos out there with the 94 Nabisco All-Star Legends Card going for $9.51 in a recent auction. The 94 Nabisco cards are an unliscensed product thus Gibson is not identified as a Cardinal. If you're interested in Hall of Fame autos for cheap the 94 Nabisco's are a good way to go with lots of the entire set occaisionally popping up on eBay. Other autos that are liscensed include the 1997 Donruss Significant Signature (12.88), 99 Fleer SI Greats of the Game (13.50) and the rather sharp 2008 Sweet Spot ($25.50)

1970 Bob Gibson cards in crap condition like the one above can likely be had for less than a dollar. I don't recall but I am fairly sure this one was in that range.

Price quotes above are from ebay completed auctions and include shipping. Any links to cards are strictly to show an example of the card and are not a site endorsement.
Posted by deal at 10:03 PM

Email ThisBlogThis!Share to TwitterShare to FacebookShare to Pinterest
Labels: Baseball Hall of Fame, Bob Gibson, Cardinals, For The Collector, FTC, Hall of Fame