Phungo 5 with Thoughts and Sox

This weekend Red Sox Nation will trek into Citizen's Bank Ballpark. Neither Boston nor the Phils have a natural interleague rival, and the two teams are geographically easy to schedule, so they have met several times during interleague play. Many of these meetings have not gone well for the Phils, but this is the first time that the Phils are the reigning World Champions. It should be an exciting weekend, each team leads their respective divisions and the last 2 World Series as well as 3 of the last 5 have been won by the two teams.

To help us here at Phungo catch up with the happenings of Red Sox nation we have called upon Thoughts and Sox for this weeks Phungo 5.

1) Is Curt Schilling a Hall of Famer?

Man, you are starting out tough. I'm torn on this one. He is one of the greatest big game pitchers of all time but doesn't have the regular season stats to be in the hall. With that said, I really think that it will come down to two things: how much he runs his mouth in the next five years and how many more of the players from his era get the PED black ball. I'm going with yes right now because he is a former Phillie and I want the point at the end of this.

2)Is Terry Francona a good manager or is the team so good that anybody could anybody manage the Bosox to two titles?

Tito's Red Sox teams did that no other Red Sox team did for 86 years Win the World Series. To me it shows that not just anybody can manage this team. The hardest thing to managing the Red Sox has got to be the media and he handles it extremely well. He has a tendency to be vague and sticks with a veteran for too long (Papi...) but I wouldn't want anyone else at the helm. 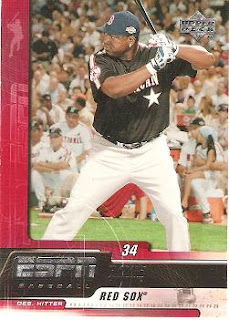 3) What Red Sox vintage set are you most interested in completing currently?

4) Where do you find information on Boxing Cards? And is my Tommy Loghran card worth anything?
You can get some good information on boxing cards at both http://boxingcarddigest.com and at http://americasgreatboxingcards.com. I'm guessing it is either a 48 Leaf or a 51 Ringside. The Leaf is a little more sought after but either will sell on ebay for $1-10 depending on condition. The real question is, would it be worth a 1960 Topps Phillie card to you?

Phungo: As much as I would love a '60 Phillies card but the Loughran card is staying in my collection.

5) Which do you find more annoying Cards Fans or Yankees fans?

I gotta say Cardinal fans because they are just as die hard as Sox fans and that is all I see here in Missouri. I have to deal with constant banter from all my Cardinal fan coworkers. I may have brought it on myself a little bit though when I handed out a half dozen brooms at work in October of 04. Needless to say the guys in the office were not very appreciative.
hmmm I can give points on every question but the first. There were moments when I loved Schilling here and then there were moments when I could not stand him. Since Adam starts out by admitting he is torn I will award the point. So 5 out of 5!!.
Thanks Adam, this is all good stuff. On Q2 I agree, the Bosox have thrown out a High Payroll roster but that isn't always a gimmee (08 Yankees). Francona has gotten that team into the playoffs every season and then into the World Series twice. Last year the Red Sox pushed the ALCS to 7 games before being eliminated. Francona has taken all those players and they are always competitive, that isn't easy and should be commended.
We are going back north of the border next week as we will visit with Blue Jays Cards for their take on this years 93 World Series reunion. If you would like to look back at a previous Phungo 5 click here for an interview with Sooz of A Cardboard Problem
Posted by deal at 6:39 PM

Many people, wow gold myself included, are excited about the iPhone OS 3.0 up date, which is released tomorrow for all iPhone and iPod cheap wow gold Touch owners, though Touch users have to pay for it. If you use the Blizzard Mobile Authenticator app, though (and there's little reason not to; it is free, buy wow gold and extra security never hurts), you should take one precaution first.
Every so often, even the best-planned upgrades world of warcraft gold go awry. In case your iPhone 3.0 upgrade breaks and you have to restore the iPhone, wow gold 5000 you should make sure to write down the serial number of your Mobile Authenticator ahead of time (or take a screenshot of it and transfer it to your computer).
The serial number is found on the Setup screen of the Authenticator, and Blizzard will need this number silkroad online gold from you if you need to detach the Authenticator from your account (because your iPhone needed silkroad gold to be restored the Authenticator got a Lineage1 adena new serial number.